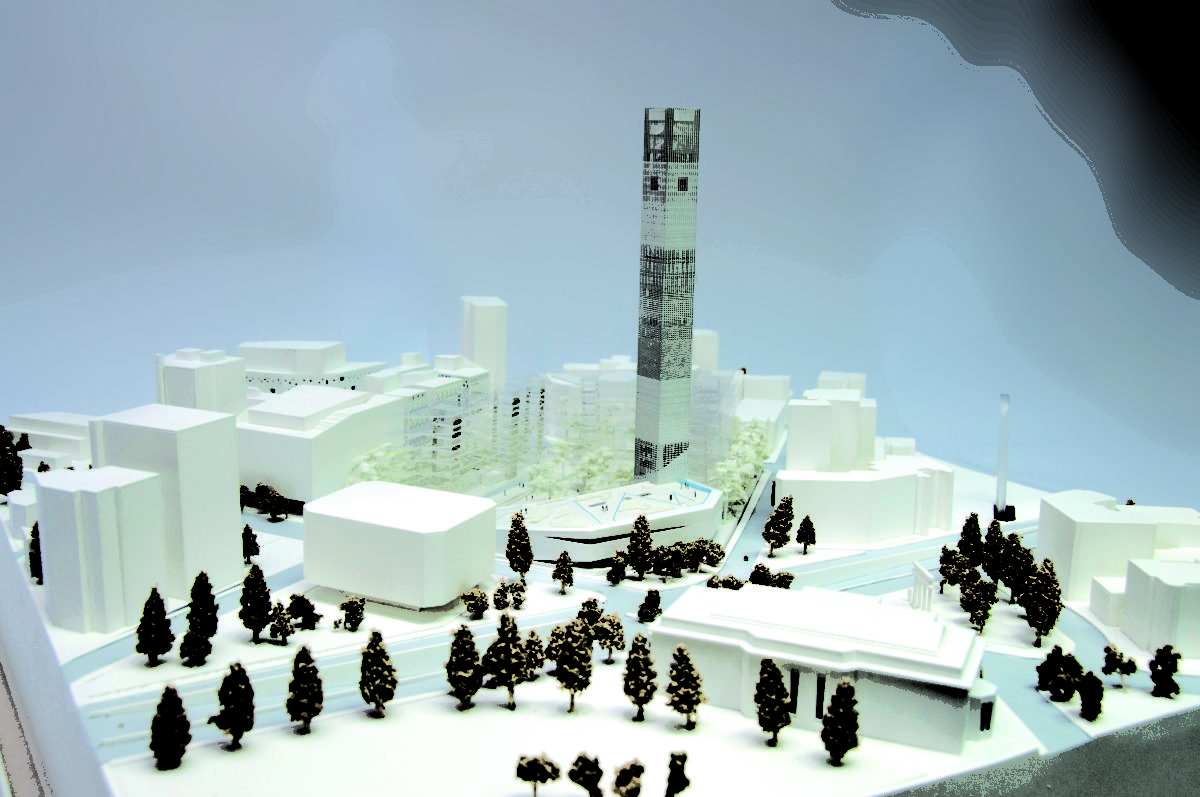 2020 will the new BeMA (Beirut Museum of Art) open and they just announced the winning design for its building:  Paris-based, Beirut-born architect, Hala Wardé. The firm HW architecture was selected from a shortlist of 13 design teams. The new museum will be centrally located in the heart of the Beirut positioned on a symbolically-charged site in Beirut that once marked the dividing lines in the Lebanese civil war. The museum’s permanent collection will include modern and contemporary artworks from Lebanon, the Lebanese diaspora and the wider region. 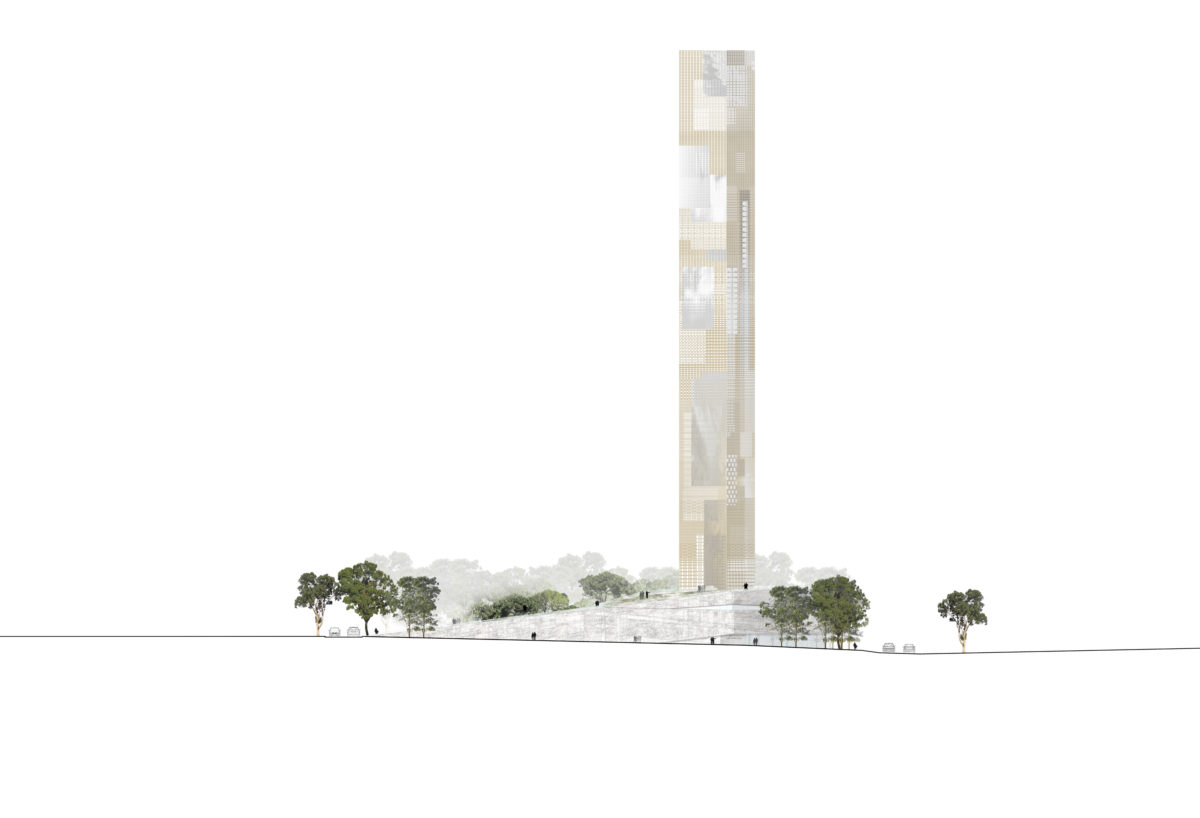 HW´s design features a central campanile tower that will rise high nearly 400 feet above the base of the museum to act as a cultural beacon for the entire city. The campanile will include space for workshops and performances, as well as artist’s residences with expansive views of downtown Beirut; a public garden and landscaped promenade that will accommodate site-specific installations and artworks surrounded by lush vegetation; as well as an amphitheater for performing arts. The Museum is situated on a plot of land owned by Université Saint-Joseph (USJ) and the selected design reflects a careful consideration of connections to the campus and to the larger urban surroundings. 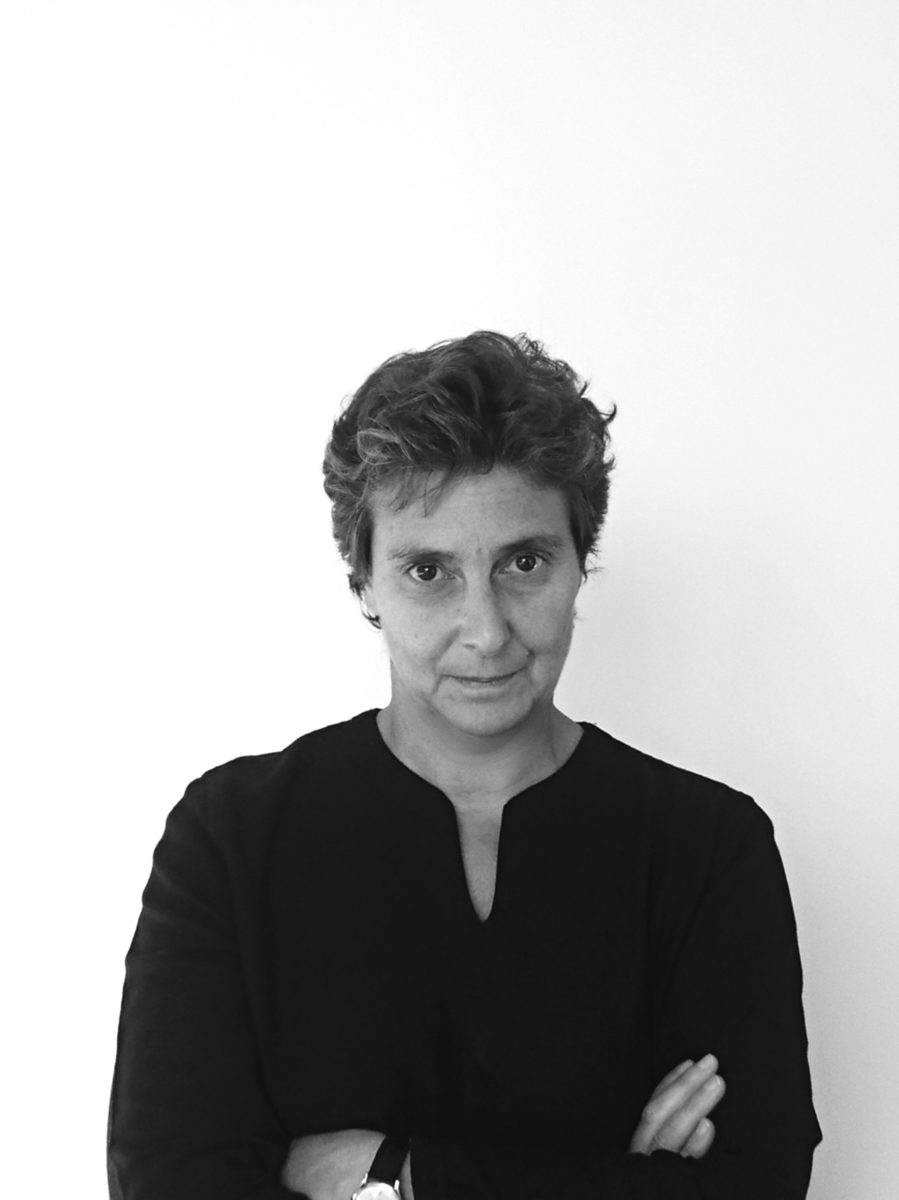 Hala Wardé: “I am delighted and honored to realize my first major project in the city of Beirut where I was born, on such an exceptional site. This museum program, in connection with the university, will allow us to create a new cultural and social space with a garden and amphitheater, and will single out this artistic territory with a strong and recognizable urban beacon, which through its multiple expressions, will belong to the new urban landscape of the city. It is a moving coincidence to receive this news as the architectural world is gathered in London to honor Zaha Hadid, an inspiration to women and architects worldwide, who was originally a member of this competition’s jury. I am thinking of her today with great affection.” 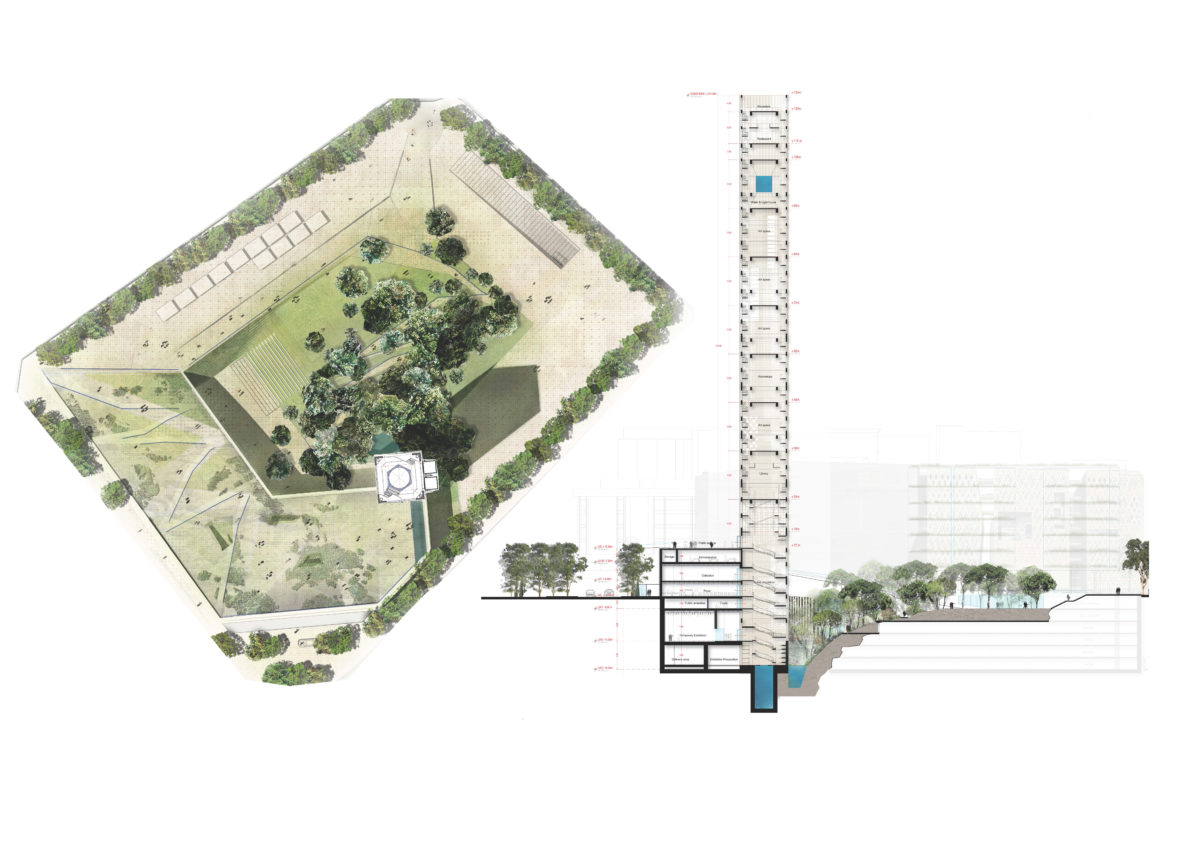 The Beirut Museum of Art Design Competition Jury, chaired by Lord Peter Palumbo, chose Wardé’s design for it’s consideration of the site and surrounding context, which weaving together remarkable landscape, urbanistic, and architectural design elements including a tower designed to house exhibition space and artist residencies. In the statement announcing the winner, the Jury noted that the design was selected for “the way it creates a succession of varied landscapes and spaces where art and society can come together. The connections between garden, amphitheater, exhibition spaces and roof garden have been well considered and offer a continuous visitor experience that lends itself to both exhibiting art and engaging with the community.”
The international jury was chaired by Peter Palumbo, Chairman of The Pritzker Prize for Architecture, included curators Hans Ulrich Obrist and Dame Julia Peyton-Jones; architects George Arbid, Dr. Farès el-Dahdah, Dr. Rodolphe El-Khoury, Rem Koolhaas, and Lord Richard Rogers; artist Lamia Joreige; and APEAL president Henrietta Nammour. The late Zaha Hadid, who was active on the jury until her unfortunate passing in 2015, remains an honorary member of the jury.
ABOUT BeMA: BEIRUT MUSEUM OF ART
BeMA: Beirut Museum of Art is a new museum set to launch in Beirut in 2020. A new cultural hub highlighting modern and contemporary art from Lebanon and from the region, the museum will be privileging Lebanese and Lebanese Diaspora artistic creation, while also introducing regional and international artistic traditions and production. BeMA will engage with diverse communities and host cultural and educational programs, in the service of building a committed civil society. In addition to housing a collection of modern and contemporary works, the museum will also create opportunities for the production of new artistic work. BeMA will bring together different narratives, foster conversation, in connection with cultural organizations and partners across the region and globally.
In the lead up to opening its doors, BeMA is already engaging audiences through a series of evolving programs, including the launch of an artist-in-residence program, a series of commissioned artist interventions, and a collaboration with community arts organizations across Lebanon. Future programming includes artist publications, research and education initiatives, an online archive, and ongoing new commissions developed in collaboration with key local, regional and international partners. 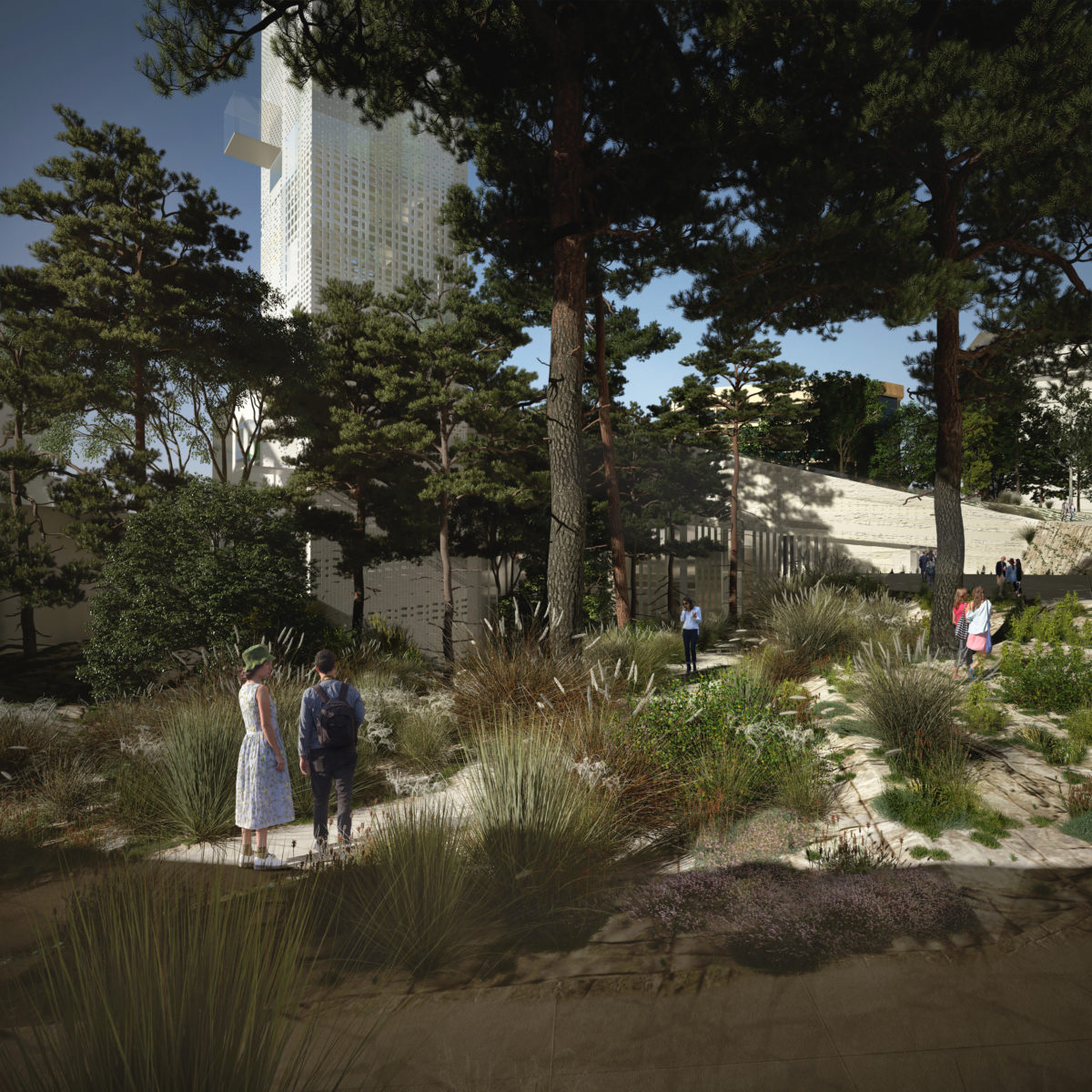 ABOUT HALA WARDÉ AND HW ARCHITECTURE
HW architecture is an architectural practice created in 2008 by Hala Wardé. HW architecture’s multi-disciplinary team of creative individuals has gained expertise in designing and delivering large scale projects such as museums and mixed-use centres as well as small scale projects such as art galleries and private houses. The studio has in-house architects, graphists, designers and model makers supplemented by an external network of specialized consultants including scenographists, museologists, lighting specialists, signage and graphic design specialists, architectural historians, landscape and public realm designers.
Hala Wardé has collaborated for over 26 years with Jean Nouvel. Projects developed by HW architecture in association with Ateliers Jean Nouvel are regulated by a privileged partnership. In the framework of this partnership, Hala Wardé was recently in charge of the One New Change office and retail centre in London, delivered in 2010, and the Landmark project, a mixed-use complex in the city centre of Beirut. Hala Wardé is currently leading the Louvre Abu Dhabi project, which she has been overseeing since its inception in 2006. The Paris-based office has a dedicated team for the development and site supervision of this project in Abu Dhabi. (press release)