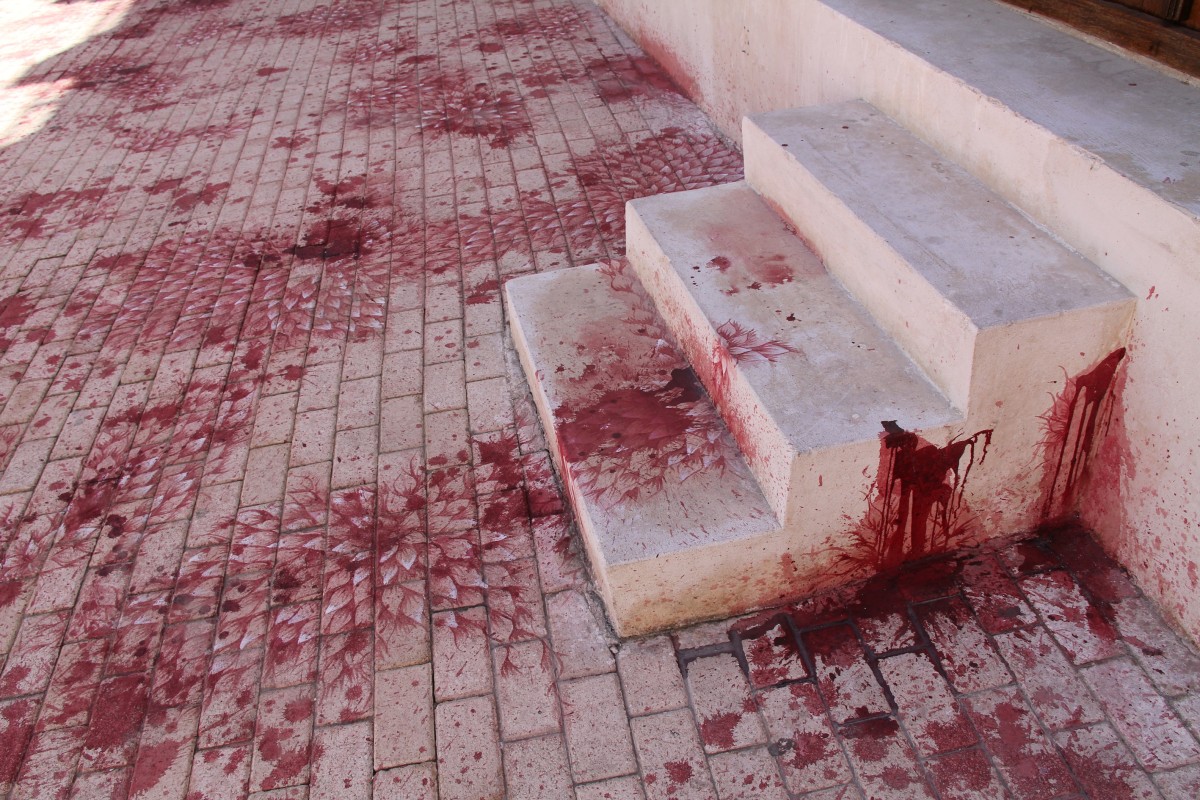 Blood-red colour is everywhere. The whole courtyard is a shambles. Splatters cover even the stairs and the walls. But then you notice the little white, floral ornament. They are fused with the colour of blood, they emerge from this image of violence. Imran Qureshi has created this floor painting for the 10th Sharjah Biennial (United Arab Emirates) in the courtyard of a historical building near the Sharjah Art Museum. With this installation Qureshi found an iconic image that characterises our turbulent times as a situation fraught with violence and at the same time full of hope. It is a “dialogue of hope”, as the artist states. 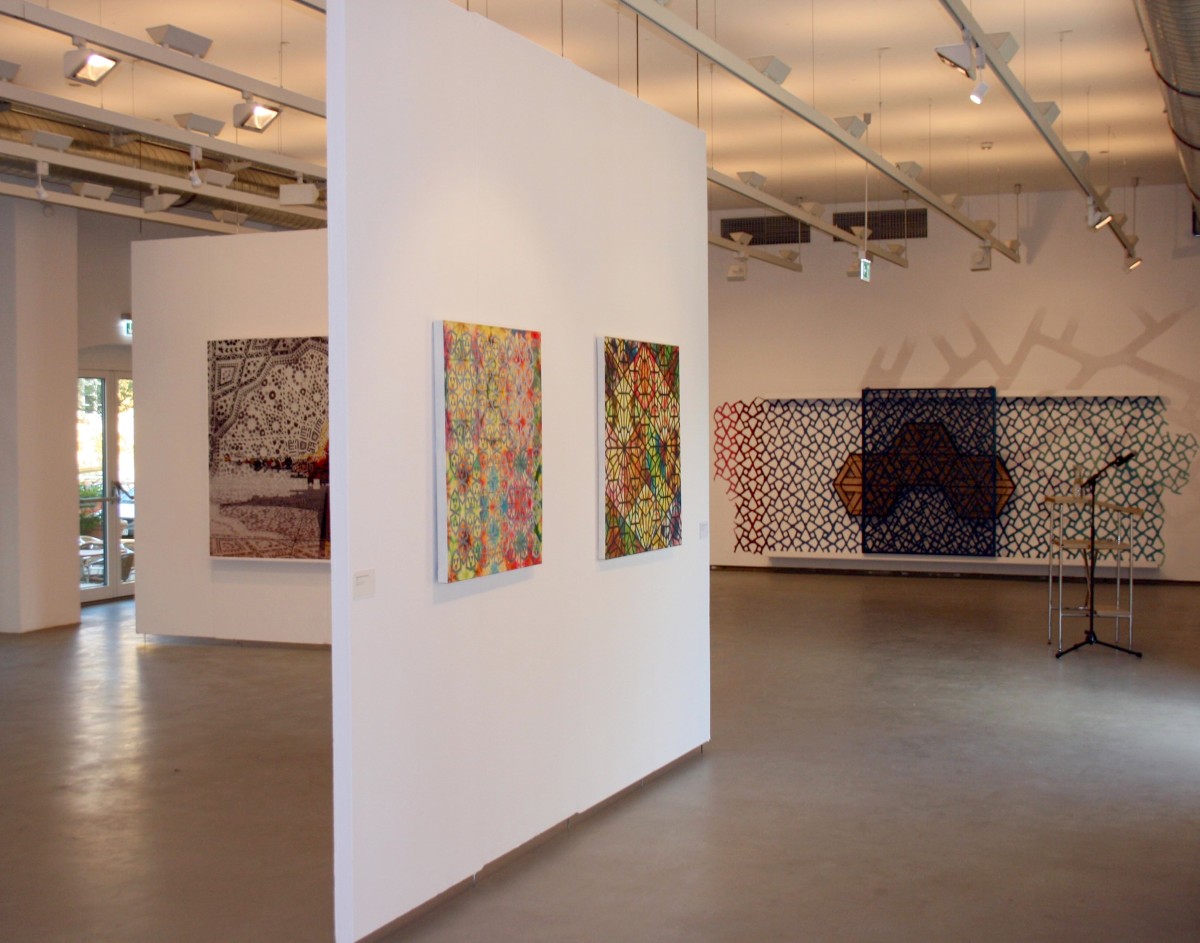 I. Violence and hope, beauty and terror – in the contemporary language of ornament these antipodes are as closely connected as are tradition and the present time. Doris BITTAR, Adriana CZERNIN, Parastou FOROUHAR, Abdulnasser GHAREM, Aisha KHALID, Zena el KHALIL, Imran QURESHI, Philip TAAFFE – these 8 artists participating in the exhibition „Political Patterns“ clearly demonstrate: today ornament is no longer harmless but contradictory in more than one respect. As an element of diverse traditions it still promises a spiritual wholeness, but it is ruptured by today’s omnipresence of violence – one of the recurring motifs in the exhibition are guns. Instead of decorating it tells of conflicts, instead of creating harmony it emphasises threat. Ornament, thus the works of art suggest, reflects the troubled condition of our world. 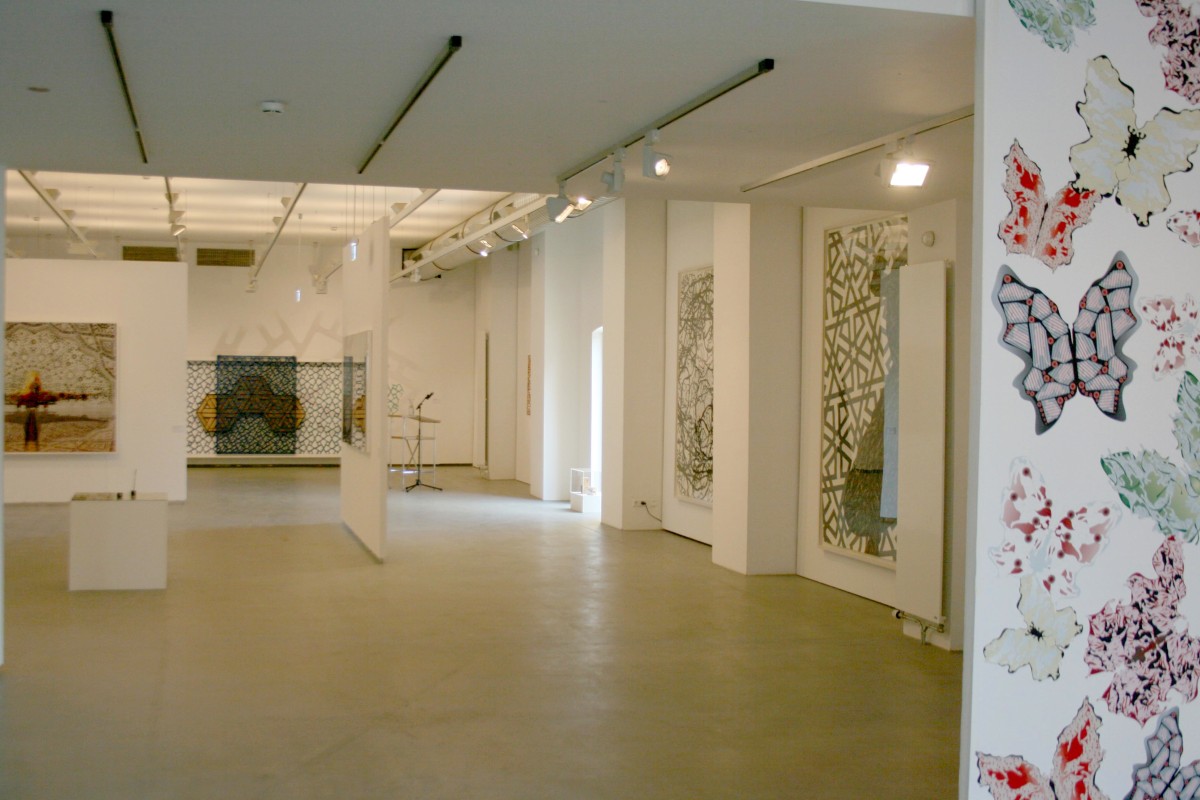 II. Short review
Derived from the Latin word ornare (decorate, adorn) resp. ornamentum (decoration), ornament repeats geometrical, vegetative or animalistic patterns applied to an image surface. It serves to heighten an aesthetic effect, to structure, accentuate or enliven surfaces, to frame, to fill – or to dignify. Ornament is considered to have originated in simple geometrical patterns like zigzag braids, waved lines or stylised animals. Every historical culture, every past epoch has developed their specific style of ornament – the Germanic peoples preferred animal ornament, while the ancient cultures around the Mediterranean Sea favoured the palmette, which had gradually evolved from the Egyptian lotus form. The Islamic culture is defined by the use of Arabesque and Moresque with their infinite patterns and the integration of script and ornament in cultic buildings. Italian Renaissance drew on ancient models emphasising symmetry, supplemented by motifs like knots, foliage and mythical creatures, and added to in the Baroque era by shells and putti. 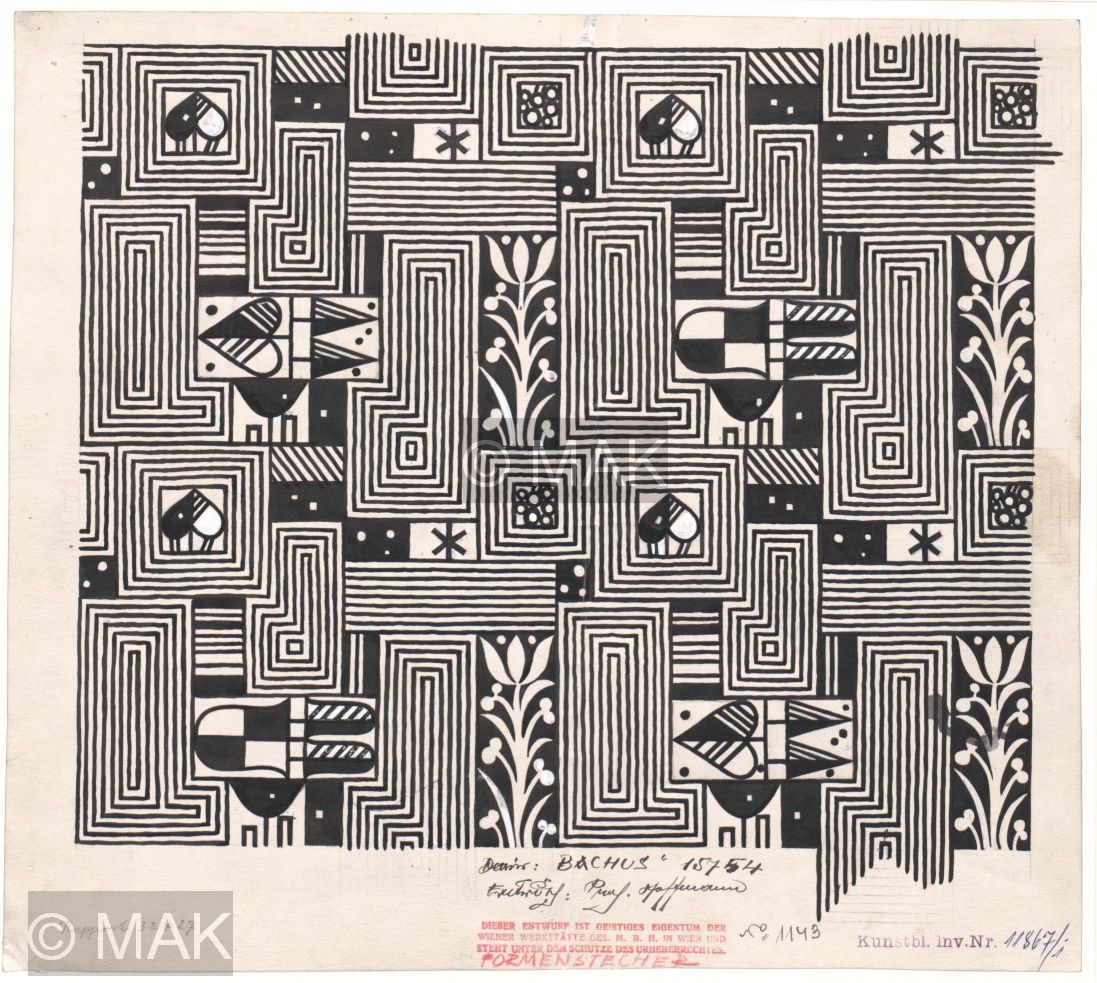 Ornament – whether abstract or floral, geometrical or playful – is a cultural universal. The balance of forms unites Orient and Occident. Beautiful patterns can create bridges – between times, traditions, cultures. Ornament is a global language. Its effect is fascinating, because a single entity is integrated, protected, neutralised within a superior unity. It is not by coincidence that ornament enchants especially in religious contexts, in connection with the belief in a higher oneness. 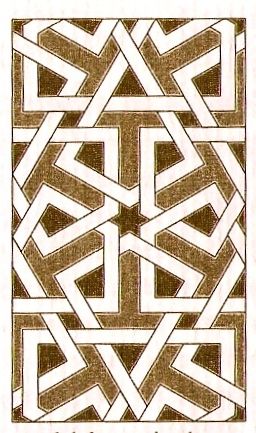 Ornament can add diversity and hence vivacity to monotonous architecture, but there is also a risk of becoming too mechanical, or florid as in Baroque and excessive as in Rococo style. Alois Riegl argues that ornament originates from the “immanent artistic drive”; according to Wilhelm Worringer ornament manifests a striving for harmonic effects and aims at representing the universal spiritual order through beauty and visibility. “These abstract regular forms are thus the only and the highest forms in which man can rest in face of the immense confusion of the cosmos.”
But ornament also acts as an indicator of social changes, for instance when decorations were criticised around 1800. The end of feudalism also brought about changes in representational regimes, in ornament as a part of aristocratic coats of arms and of clothing as well as in forms of speech and address. It is set “free” to express new contents, it becomes a vehicle for constructing civil and national identities.
Of particular relevance is the arabesque, which was subject to criticism during the age of Enlightenment, to be subsequently employed by Romanticism as a means to criticise their contemporary world. Gabriele Rippl summarises the criticism during Enlightenment: “The arabesque … was dismissed in Germany in Enlightenment and Classicism as a sign of decadence and as a decline from the height of Classicist beauty. For in contrast to rationalist aesthetics the arabesque is dominated by multiplicity over unity … it is, in Moritz’s words , a denial of the male (sublime) mode of thinking.” 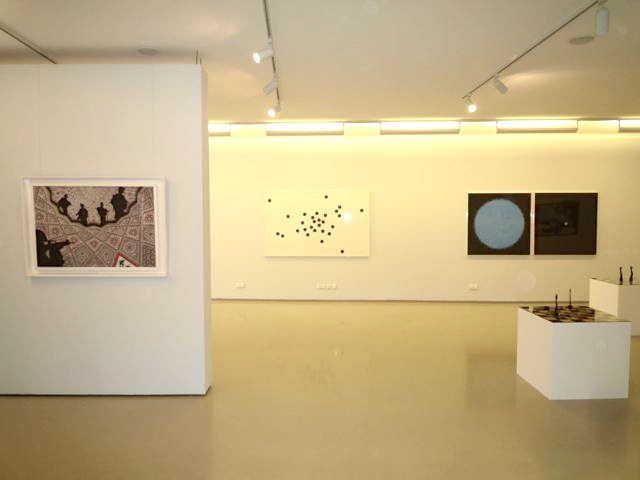 III. Ornament today
“I affirmed twenty-six years ago that the evolution of humanity would cause ornament to disappear from functional objects … but I never thought like the purists who pushed this reasoning to the absurd, that ornament should be systematically abolished. … In the drawing classroom, classical ornament plays the same role as grammar.” It brings “order into our lives”, Adolf Loos concluded in his famous essay “Ornament and Education” from 1924. For decades to come, these forms were basically banned. Today they have become ubiquitous again. What function does these forms aiming at repetition and regularity fulfil today – do ornament still guarantee order?
In his essay included in this catalogue Burghart Schmidt pointedly summarises the changeful history of ornament in the thesis: “Delight in ornament is a symptom of eminently severe crises.” And so the artists of this exhibition do not talk about harmony and order, but about conflicts and controversies. Since the turn of the millennium, at the latest, we notice a distinct unease about the unbroken beauty and the strict structuring power of ornament. Possibly reinforced by globalisation and transnational or transcultural identities ornament today does function as bridges between traditions, on the one hand – on the other hand, however, it is increasingly being used as a means of criticism: of suffocating female role models; of totalitarian political systems; of standardising behavioural patterns, expectations and conventions. 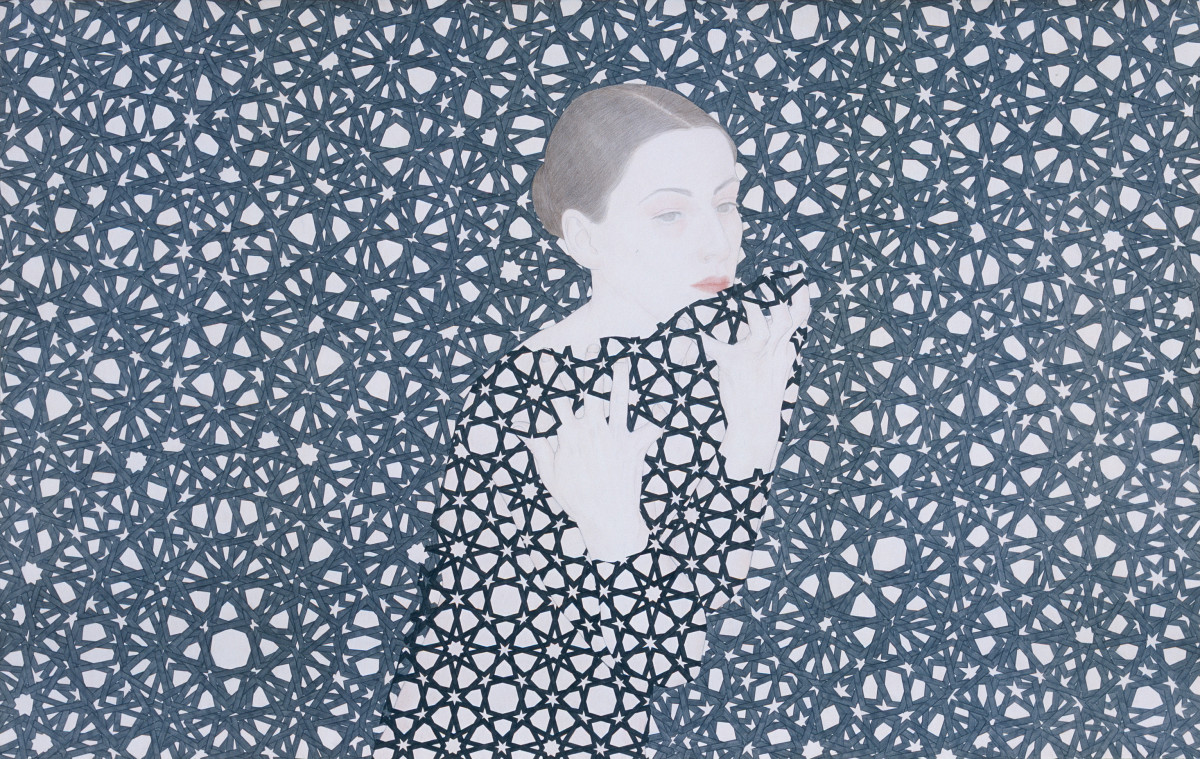 Adriana Czernin takes up the compulsiveness of ornament by depicting in her earlier drawings women who are imprisoned in a mesh of arabesques. Clothing and background contract into a corset. Defined as “investigation of the inside”, her works have expressed psychological processes since 2008. 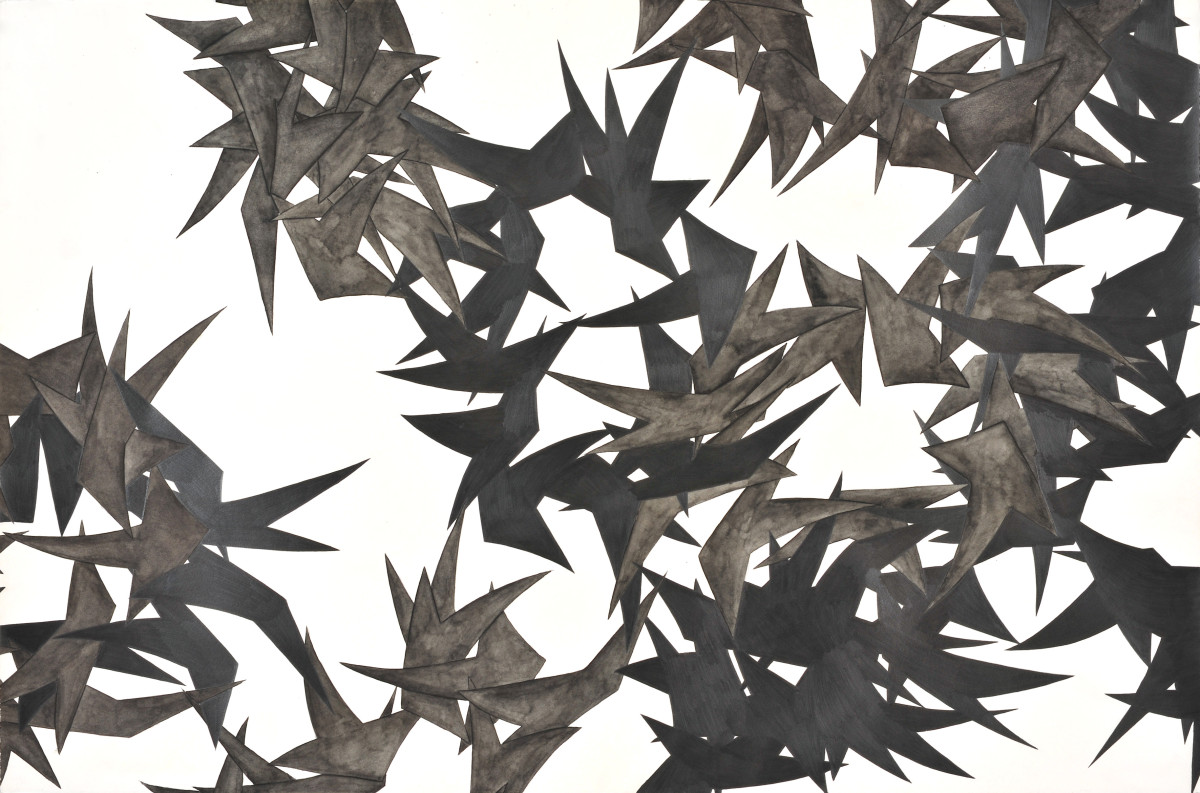 Provocatively ominous and aggressive, these patterns, far from being lovely, lack perspective and close off the space. 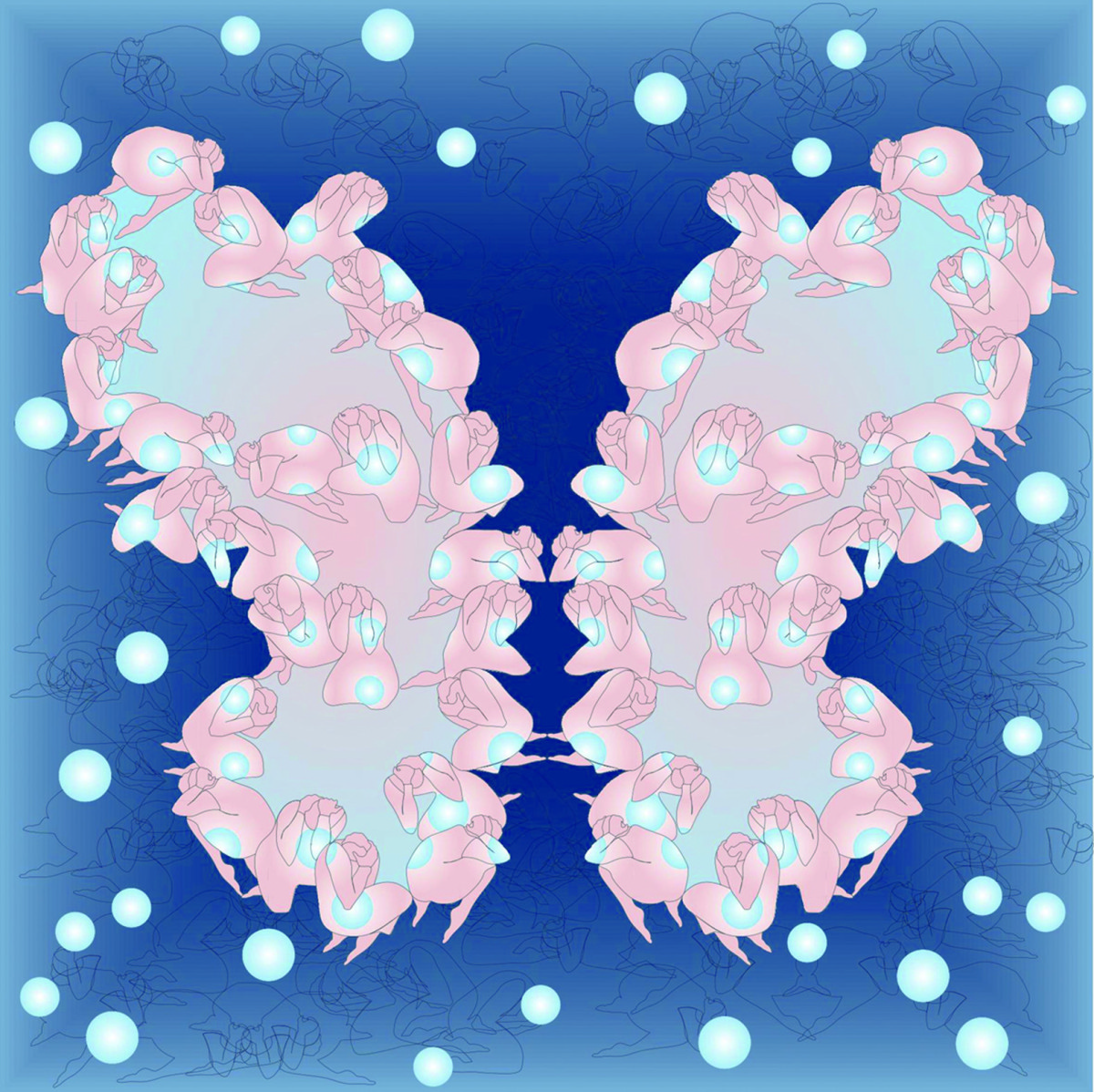 Parastou Forouhar, too, draws our attention to the brutality of ornament. “That which does not subject itself to ornamental order cannot be represented and therefore does not exist, it is banished into the periphery of unworthiness, condemned to annihilation”, she explains. Every irritation, even the slightest variation within the pattern yields a massive disorder, the breakdown of the system. There is no provision for individuality, stepping out of line is not permitted. A central reference point for her works is the politically motivated murder of her parents Parvaneh and Dariush Forouhar , but also the threatening regime in her home country, Iran. Her computer-generated ornament comprise weapons and torture scenes. 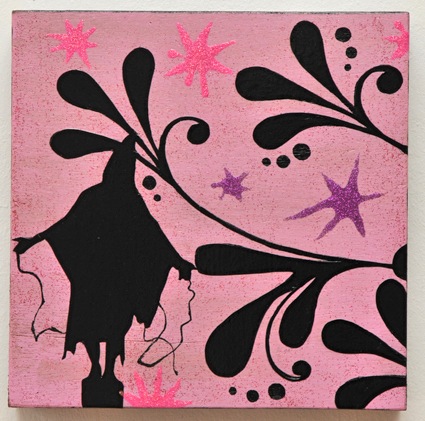 Zena El Khalil also confronts the beauty of ornament with the violence in her reality. 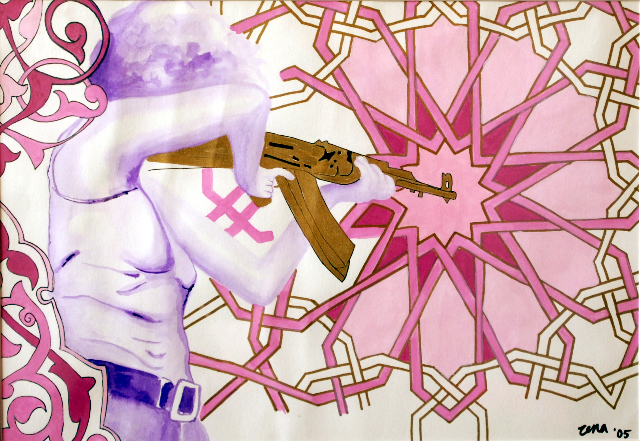 What seems to be pink. naïve and girlish at first, soon turns out to be a multiply divided and refracted response to the omnipresence of guns, tanks and bombs, of destruction and threat – a response to her life in the war-damaged city of Beirut: in Hope the young woman’s gunshot creates an abstract, harmonious ideal world from floral and ornamental forms. 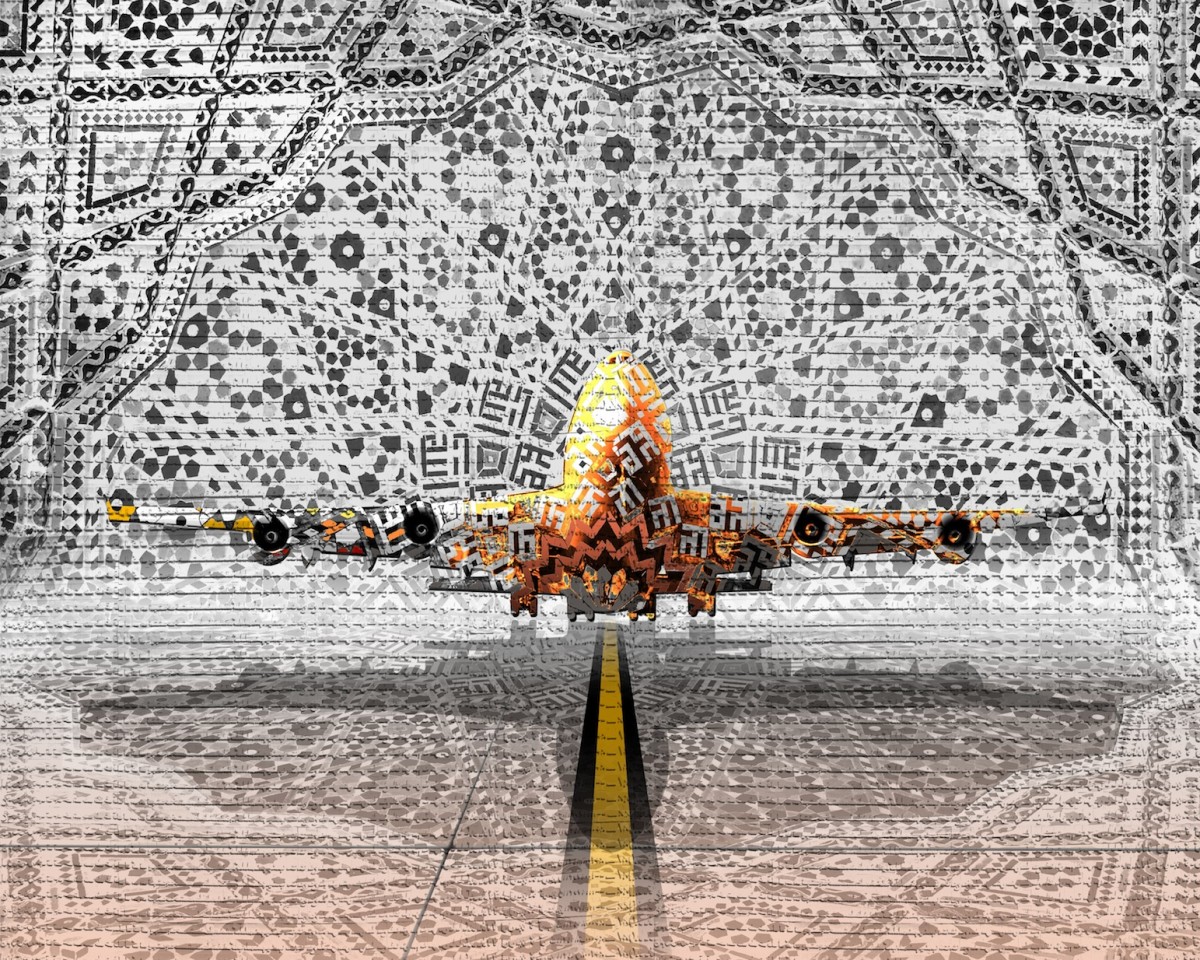 Abdulnasser Gharem focuses in his paintings on central motifs, which he juxtaposes in striking contrasts: soldiers confronted with the harmony of a dome of an Islamic mosque; a plane as a weapon for war and terror, lifting off from a compact surface of tightly interwoven patterns interlaced with the words Mohammed, Allah and Ali. “In Transit represents a confused ideology and the strange times we are currently living in – whether between moderate and extreme or East and West”, Gharem explains in an interview for Esquire Middle East in March 2011. 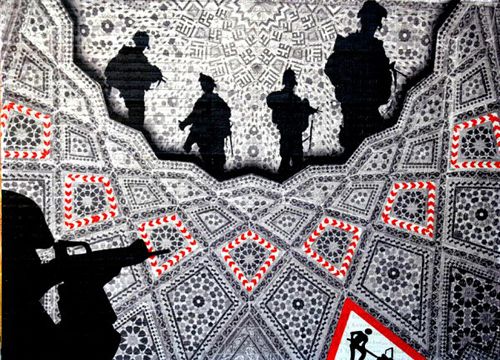 Doris Bittar aims at a similar confrontation. Baghdadi Bride refers to Jasper Johns’s flag from 1954, which only contained 48 states, at that time still arranged in a regular grid – representing a time for Bittar “when the United States began to create a foreign policy based on a neo-colonial agenda; the beginning of our misguided foreign policies.” 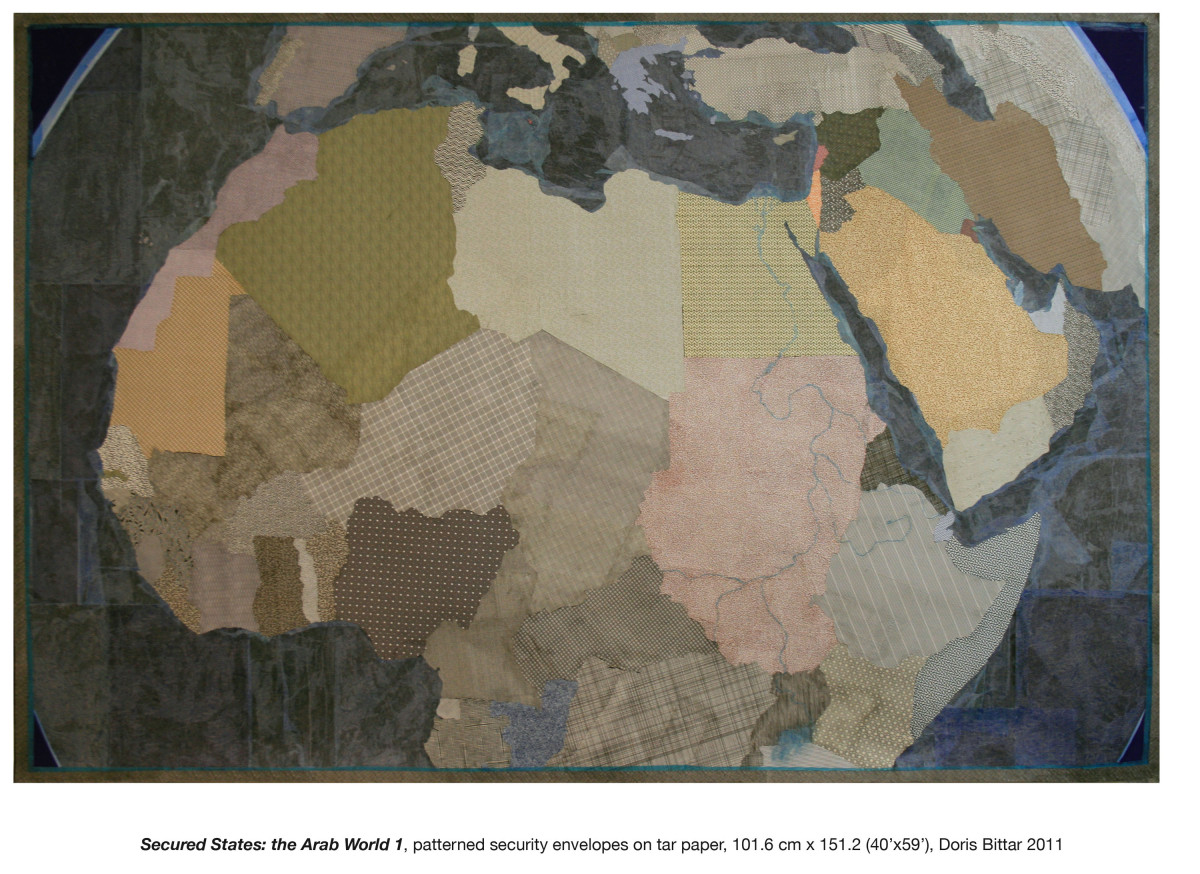 Her Security States are collages of security envelopes used by banks to post official documents – ornament prevents the contents from showing through. The artist uses the various patterns to mark particular countries on world maps. “My research on each country includes studying their cultural patterns, their history and their juxtaposition to other countries. Then I am certain that the pattern I have chosen is the correct one.” 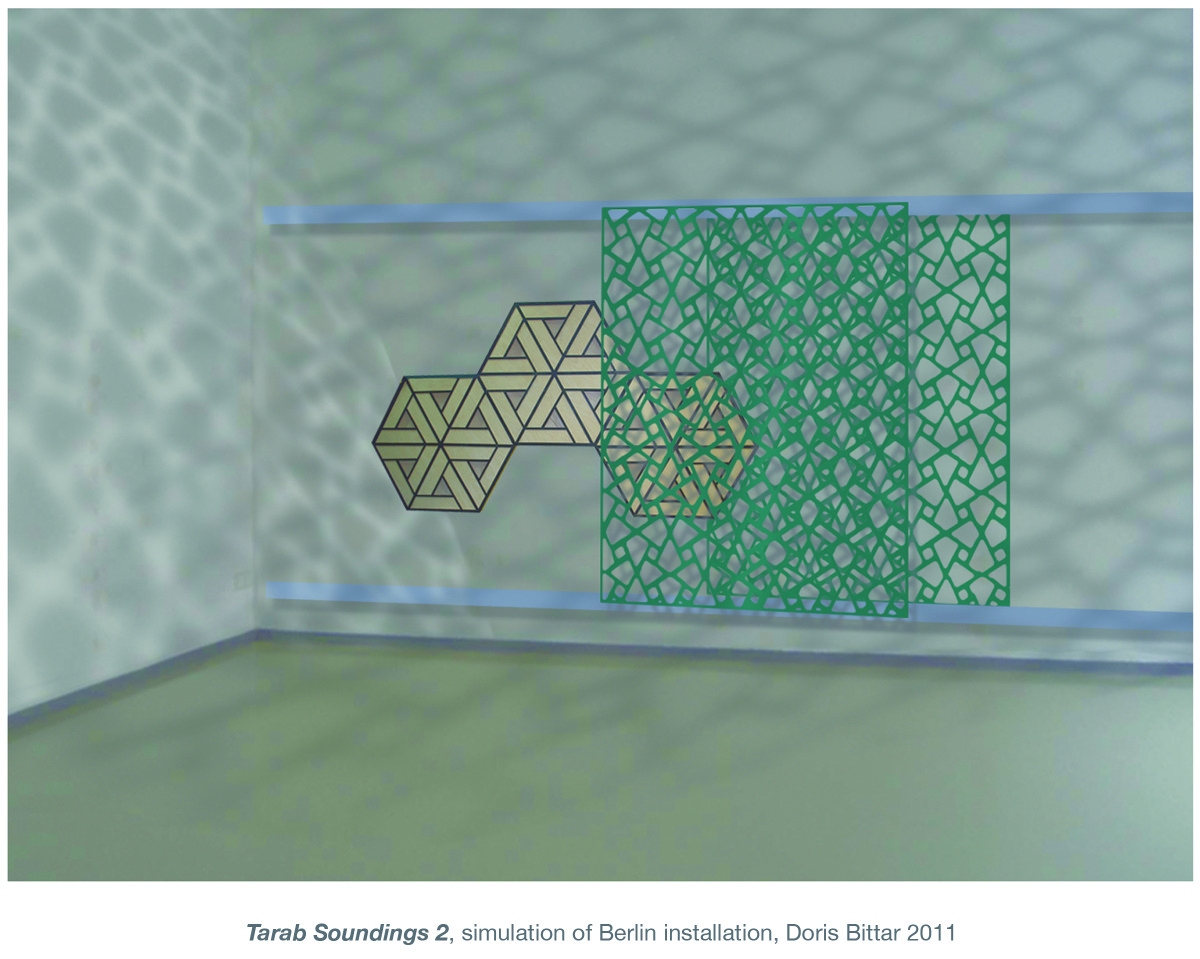 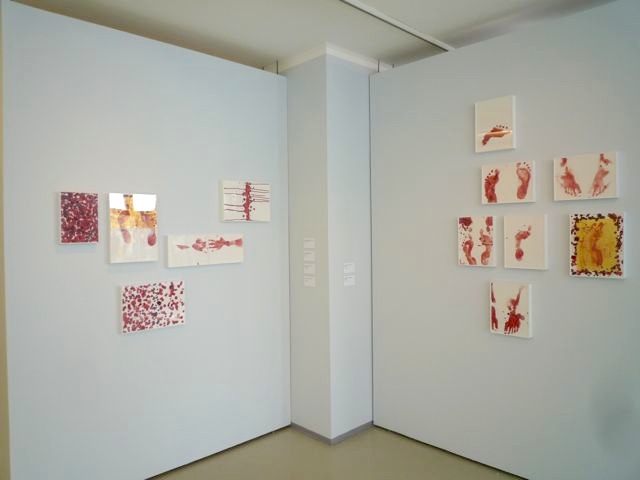 Trained in miniature painting, Imran Qureshi began as early as 1994 to expand this traditional art form as a contemporary means of expression. At the 1st Singapore Biennial 2006 he painted small blue floral patterns from the roof of the Sultan Mosque onto the floor and the façade – like ephemeral traces of life, like a memory, a playful approach towards tradition and religion. “I tried to create a tension between the Islamic geometrical pattern and my own vocabulary. … Wuzu was made against the background of the current political situation between the West and the Muslim world”, Qureshi states in an interview with Susan Acret for Asia Art Archive. “I always enjoy going against the traditional process of making a miniature painting and breaking its boundaries.” 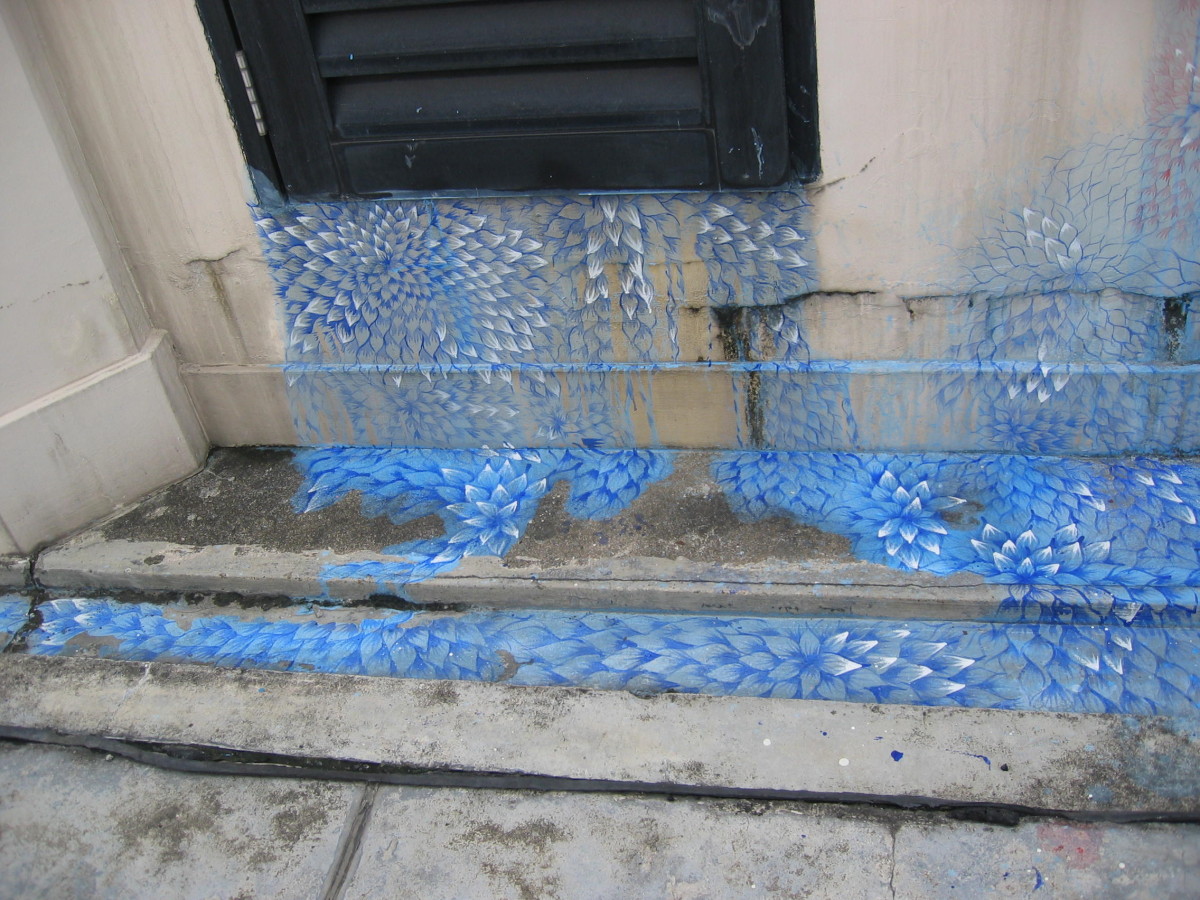 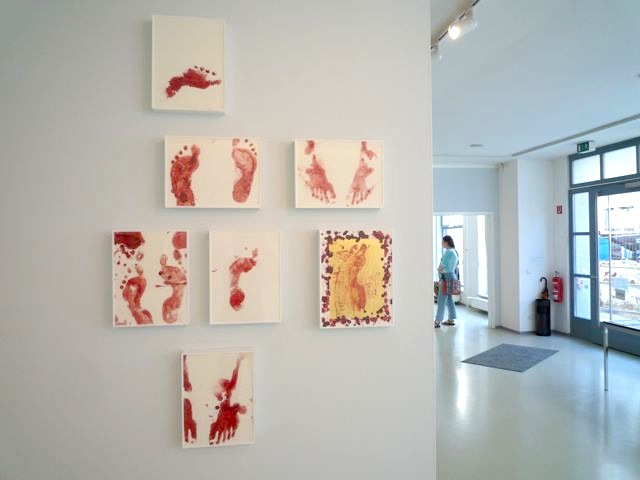 One of these “breaks” is the continuous golden background of his paintings. In miniature painting gold is used only for ornament and for the decorative margins of the images (and texts). On the one hand, Qureshi thus exaggerates the exotic aspect of his extension of the tradition into contemporary art. On the other hand, he regards it as a challenge to bring his forms to bear in front of a background as powerful as this. “At the same time symbolically gold represents something spiritual.” In his recent works he takes another, radical move by working with body impressions and splashes of colour, from which ornament emerges – as in the works presented at the Sharjah Biennial. 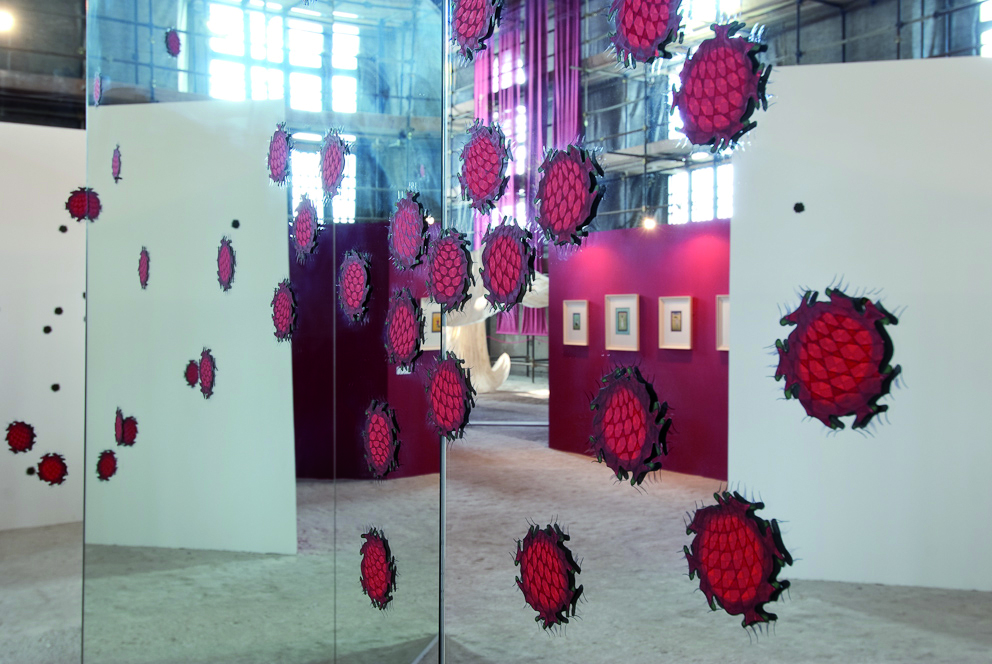 In her paintings Aisha Khalid also combines tradition with the present day. She is an educated miniature painter, too, and has been working with floral and geometrical patterns for over a decade. Her early paintings, which were rendered in a more figurative manner, circled around the social role of women. Since 9/11 she has condensed these forms into a visual sign with a much broader meaning, namely representing “the whole of our geographic region, which was brought into discredit after 9/11”. In her site-specific work at Queen’s Palace, Kabul, she turned this sign into a form resembling a bullet hole; subsequently in Venice she spread these forms over a large mirror so that the bullet holes were projected onto the visitors, onto the whole room. In her recent works she no longer refers to the visible world. The colour green is closely connected to Islam, these paintings are much more about time, about space, about herself – about love. 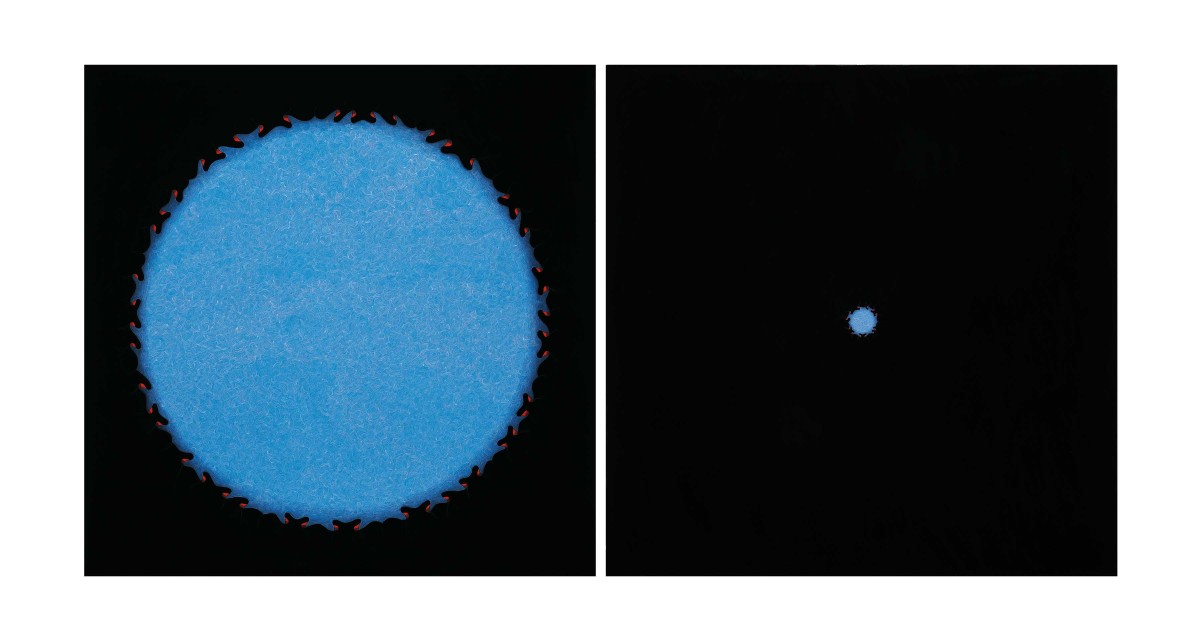 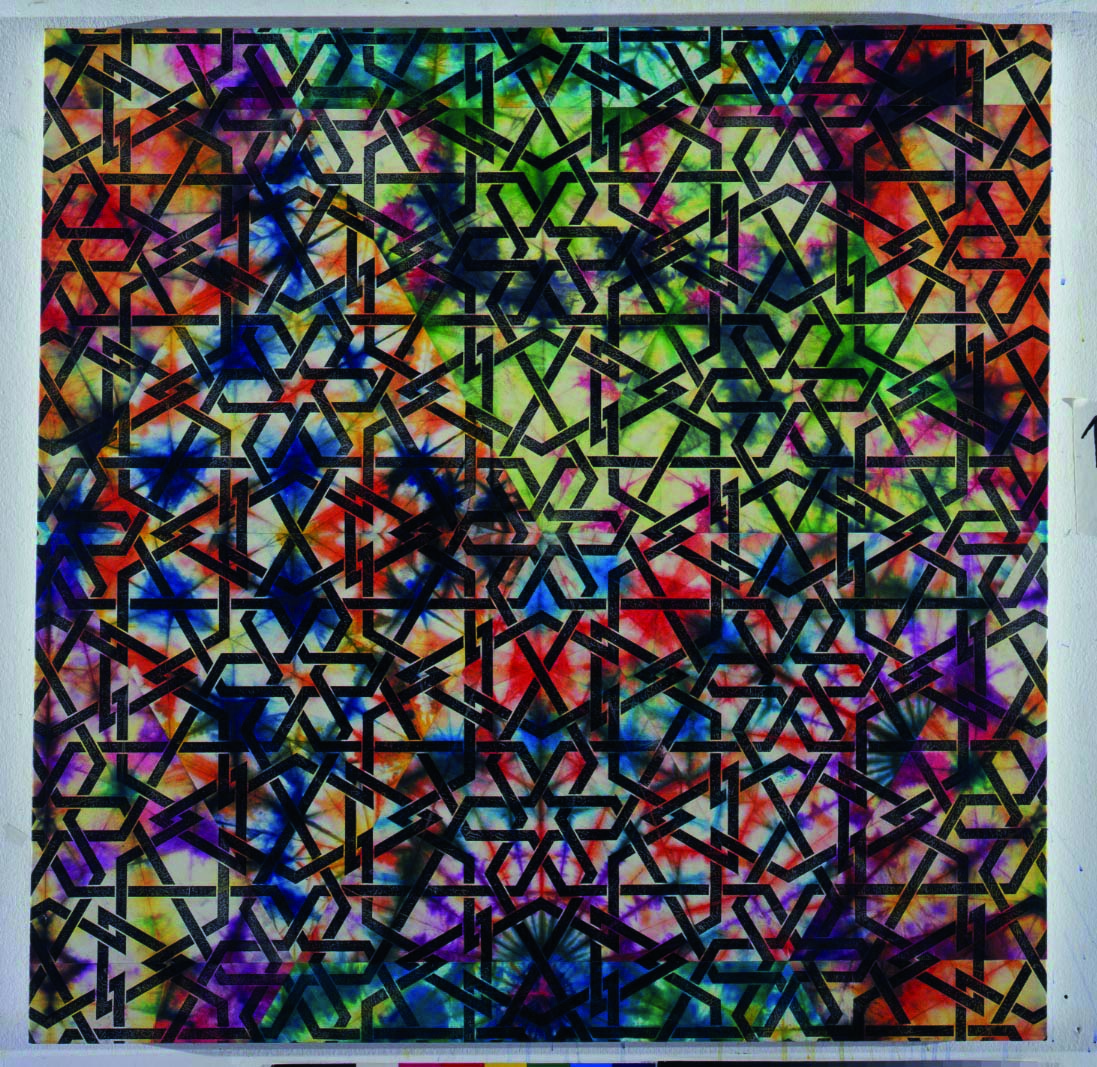 Philip Taaffe has been painting ornamental structures since the 1980s, combining fragments from the most diverse cultures, drawing on Greek, Islamic, South-American or Uzbek architectural fragments, tile patterns and forms, mixing in fossils, but also elements of Op Art, sometimes even adding a butterfly or a lizard. These formations of historical, cultural and often also visual layers create psychedelic paintings that draw us into their world. With their formats of often more than three metres in width they embrace us in a physical sense, too. While ornament transfers traces of its origins into the paintings, Taaffe’s works do not contain specific references, do not refer to anything in particular, but seem like spaces to immerse into, or like central points from which new worlds emerge. 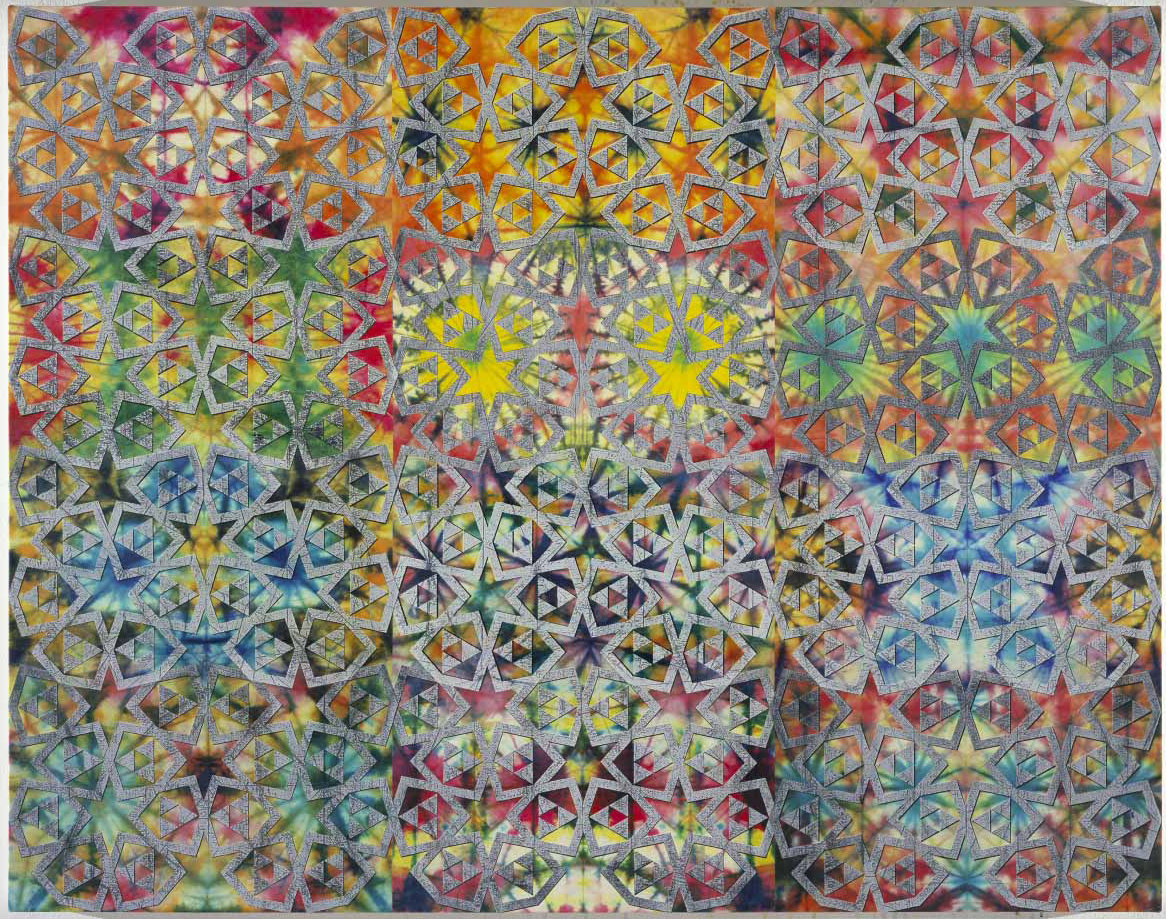 They are journeys. “Painting is a manifestation of human consciousness: it’s travelling back in time and knowing the past is a part of us.”