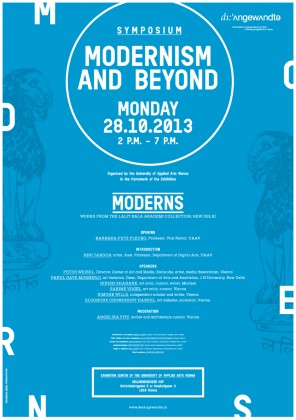 Parul Dave Mukherji
The National Modern from the Lens of the Global? Ethnicity Then and Now
If 1947 marks the end of colonial rule in India, 1992 encapsulated a contradictory moment of progress and regression. While “international” and “global” emerged as buzzwords to celebrate the opening up of the Indian economy, horrors of communal violence following the demolition of Babri Masjit marred the euphoria of having arrived. Easel painting, a medium revered by the moderns, lost its appeal as installation and the mediatic captured the imagination of  contemporary Indian artists. With the national modern losing its hold over artists, they acquired a new visibility in international exhibition spaces contesting the label of ‘Indian’ artist forced upon them. Via self exoticization and masquerade, artists like N Pushpamala, Nikhil Chopra and L N Tallur took on the role of ethnographers and acquired a new agency in defining their practice away from both the Eurocentric notions as well as from nationalist definitions of art. Today, within the vocabulary of the art curators and art historians situated in the west, the term global  contemporary has acquired a new purchase and they too, like the artists, have taken to extensive traveling to spaces that were not part of the dominant art world. Under such conditions, the question of ethnicity and Indianness once again raises its head. I propose to stage a conversation between the modernist moments of 1950s when John Berger wrote on Francis Newton Souza and contemporary curators of the global contemporary and ask how global is the global contemporary which continues to remain steeped in ethnicity and territorial imagination. What has perhaps
changed in the shift from the modern to the contemporary is a new agency in fashioning selfidentity with less reliance on the endorsement from the Western curators and critics.

The currently emerging discourse on globalization has set up a new equation between art practice and art discourse. In the heyday of modern art in the West, art practice and art theory were almost coterminous to each other but when its impact travelled to its peripheries, largely under the aegis of colonization, art practice preceded theory. When  modern art theory did emerge on the fringes of the western art world, it was couched in nationalist discourse and the search for native identity- Indian, African, Latin American and so on. The charge of derivativeness flung at artists in these parts of the world was defensively taken up by the ‘local’ art critics and cultural ideologues like Richard Bartholomew and Geeta Kapur who detected in their art practices traces of hidden national or civilizational identity through which modernism was claimed to have been mediated. This paper proposes to cast a retrospective glance at the modernist moment through a contemporary lens shaped by the concerns of the global contemporary.

Girish Shahane
Radical Establishment: Indian Modernism and the Indian Nation-State Indian art in the twentieth century evolved to resemble European modernism, but also reflected ideological shifts particular to the subcontinent. It drew from indigenous traditions that provided it with a unique character and history, differentiating it from Western modernism. Whereas art and art theory in early twentieth century Europe had reacted against humanistic ideals, Indian modernism, as it developed from the 1930s, hewed closely to the Gandhian and Nehruvian ideals of syncreticism and inclusiveness. Gandhi and Nehru were anti-imperialists who became nationalist icons, and, as such, were simultaneously revolutionary outsiders and pillars of the establishment. Artists’ adherence to their vision complicated the categories of rebellion and conformism. In the 1970s, as the idealism of the early years of independence faded away, a new figuration emerged that was deeply critical of all that the Indian nation-state represented.

Sabine B. Vogel / Simone Wille
Early Modernism, A conversation
Western modernism is a period of exclusion with rigid rules. Only a couple of Western European countries and the USA were included in developing a globally binding, artistic language based on denying academic traditions and forcing innovations. Although at that time, cities like Paris or Berlin had traditionally been melting pots with inhabitants – and artists – from all over the world, the exclusion regarding artistic styles stayed strong. Only limited influences were accepted both aesthetically and culturally.
Yet, depending on local circumstances, modernity as a historical stage and modernism as a cultural project is never to be seen as a singular phenomenon. In other words, within different civilizational contexts, modernity can have different outcomes. It is never just one, but many. (See Dilip Parameshwar Gaonkar, ‘On Alternative Modernities’, in Alternative Modernities, ed. D. P. Gaonkar, Durham & London: Duke University, 2001, p. 17)

Early modern painting in India can be traced back to the first decade of the twentieth century, with the first Indian art movement beginning in Calcutta. In response to British colonialism and Western modernity, the Bengal School emerged as a cultural syncretism of different Asian cultures. The idea fostered in Bengal was that of an indigenous (Swadeshi) ideology of art, with Buddhist and Hindu aesthetics at the core of artistic practice. While the style and conventions of Mughal miniatures were practiced and explored by artists such as Abanindranath Tagore (1871-1951), in combination with the lines and wash techniques of Japanese art, “the overall thrust of Swadeshi visual aesthetics possessed a sectarian character” , as Iftikhar Dadi elucidates.
The pluralistic situation in Bengal, the gathering of intellectual, political, and cultural forces, must be seen as part of a larger, independent movement and the rise of national and cultural self-definition. While this brought with it a rejection of British academic oil painting, it at the same time fostered Hindu nationalism and, in response to this, a Muslim cultural consciousness. A discourse with South Asian Muslim aesthetics became relevant during the time of British colonial rule and after the partition of India in 1947, which was carried out along a Hindu-Muslim
divide. It was either used to glorify a magnificent past prior to British colonisation or to establish a Muslim cultural position that stood apart from a nascent Hindu nationalist construction. In this climate, Abdur Rahman Chughtai (1894-1975), who can be considered the first prominent modern Indian Muslim artist, pursued his goal of building up a counterpart in Lahore against the Bengal School.
In our dialogue we will therefore be focusing on a multifaceted, heterogeneous modernism that emerged out of individual creative projects, each developing a relationship with a distinct Indo-Islamic cultural tradition.

Eleonore Chowdhury Haberl
Evidence of Time – Experiences and Encounters of an Art Collector
The lecture focuses on encounters with the MODERNS in their beginnings and on their formative years when they studied at the J.J. School of Art in Mumbai – an art school that opened in l874 under British rule. It also recollects the important role played by Austrian and German war émigrés in the early development of Indian modernist painting and their influence on the young Mumbai artists during the war years and in the immediate postcolonial years.
The talk mentions the formation of the Progressive Artist Group in l947 by artists who later become known as the MODERNS – a development that constitutes a milestone in the history of modern Indian Art. The exchange of information with Western schools also played a role in their artistic development: some of the MODERNS, i. e. Ram Kumar, V.S. Gaitonde, Sayed Haider Raza, Akbar Padamsee, F.N. Souza and Tyeb Mehta, obtained scholarships to study at art schools in the UK, the USA and France. In her talk the speaker remembers her close friendship
with some of the MODERNS. She will also describe the slow growth of the Chowdhury art collection from the late fifties onwards until the mid- seventies, when her home was a hub for artists and art lovers. The speaker describes the Mumbai art scene in the 1960s, the social conditions at the time and the prevailing art consciousness. She also addresses the struggle of the MODERNS until they finally became recognized by the international art scene today.