A trained graphic designer, Waqas Khan completed his studies at the National College of Art (NCA) in Lahore 2008.It was more of a coincidence that he became interested in fine arts. While visiting friends in their studio, he begann, on a whim, to draw little forms with a thin pen. He would draw for days and didn´t want to stop. Soon he began showing these tiny sheets to friends. Soon he got this first shows, at the NCA „Dot (A perfect circle)“, and right afterwards „Shift“ at the Rohtas Gallery in Lahore. In January 2010 I visited Imran Qureshi, while I was preparing our show „Political Patterns“ at the ifa Galleries. Qureshi introduced me to Waqas, and it took some more days to see his drawings the first time. Lakereen Gallery (Mumbai) presented Waqas´ work at her both at the India Art Fair in New Delhi: breathtaking, little works with millions of dots, less than 10 centimeter big. 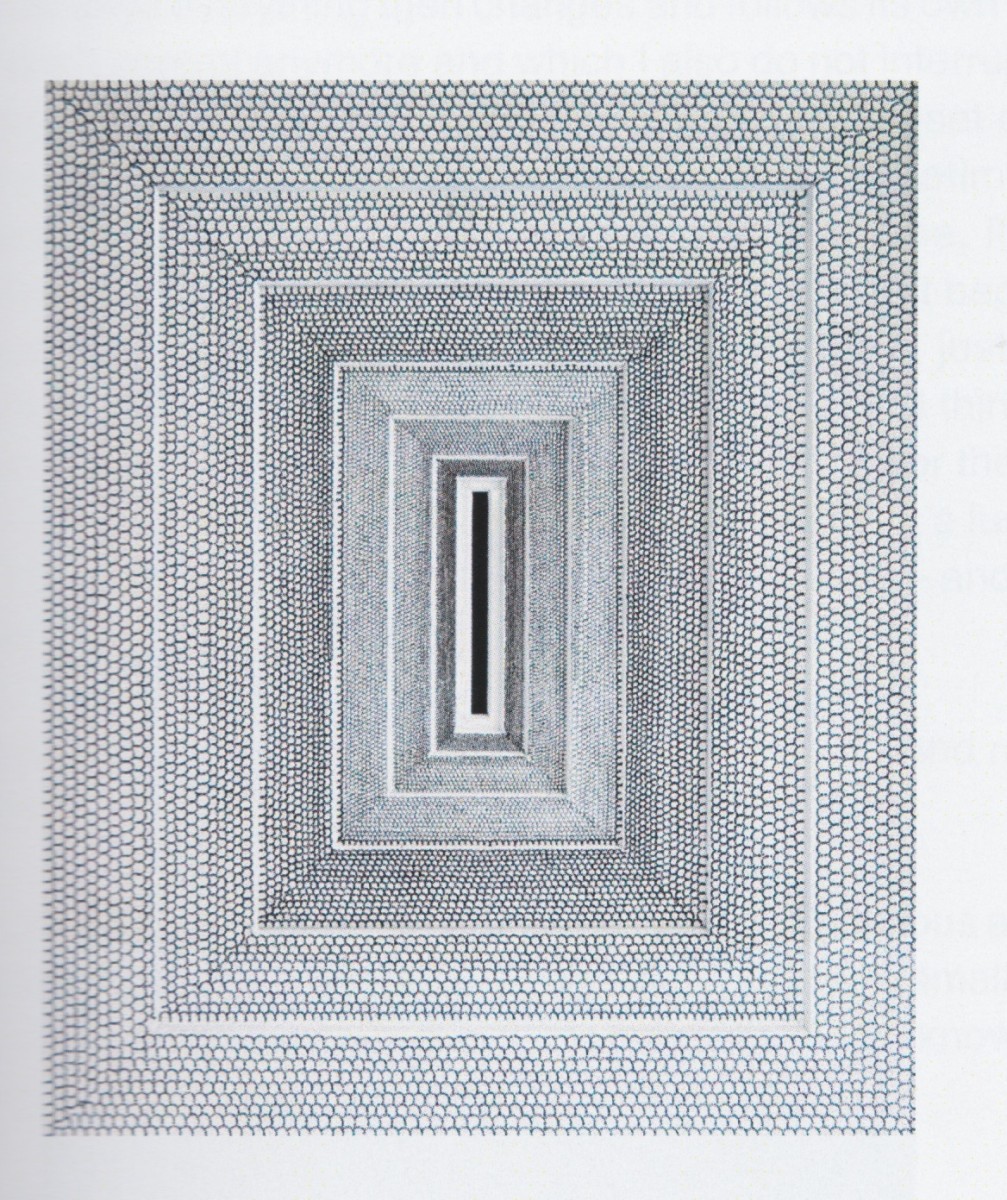 Especcialy „Seven Skies“ got my attention: Seven interlocking surfaces that become narrower the closer it gets to the center of the drawing. The dots keep shrinking to the point of culminating in the centr on a single black area, framed by white. Here the contrast between surface and space, between black and white, dots and lines, real – paper – space and illusionary space, inner and outer world gets incredible intensive. Here Khan plays with two dimensionality which he disrupts with a thre dimensional construction. The work recalls Zahoor ul Akhlaq who underscored the specific quality of miniature painting the in two dimensional understanding of spce. Yet Khan din not pursue the question of space but rahter that of movement – emotional, physical and mental.
I was immediatley taken by these obsessive drawings with amorphous circles that look like cells. Densely arranged as if they are looking for eath other they rsemble waves in a pond even though they fill the space much too precisely. In actual fact they aren´t circles but rather forms consisting of almost endless dots. They don´t produce figures but rather create a purely abstract space. Of you looks with a magnifying glass at the details your eyes catch small irrgeularities, sometimes a thick layer of pait, which reveals a stronger pressure of the pen, or an irregular arrangement – irregularities which altogether create an enormous dynamic. Like sections from a larger context the strange dot-populations, yet the entire drawing seem to drift so weightlessly, so full of lightness in an unspecific space.
While these drawings are only a few centimeter, Khan came up with significantly larger formats during his residency at Krinzinger Projekte 2012. In an interview he explains his approach:
Waqas Khan: When I begin a picture I often have a certain form, a circle or something similar in my mind. The process is like writing down a story. After a few days everything then changes and follows its own rhythm,which I don´t control anymore and which I also do not interrupt. Then everything flows from my life into it, like when I am upset or unfocussed or unhappy. Sometimes they like to dance, sometimes they also become blurred. Working is lke breathing for me, it´s part of my life, my body. I love it, I simply do it. That´s how it began and that´s how it still is. Dot follows dot, form follows form, just as you place one brick on top of the other to build a wall. I don´t think about it, I have never given any thought to the colors of pens or the size of paper – it all comes intuitively. I jump into the works, it´s just like a dance. I feel happy when I work. It all begins with dots – and it ends with them!
SBV: Initially, you worked with a strikingly small format and now you have gone far beyond that – how did this happen?
Waqas Khan: I hold the pen with both hands. This requires enormous attention and I have only slowly arrived at the larger formats. The small papers are like key models for me. Now I can feel a picture and know what it will look like in a larger format.
SBV: Are the small formats a kind of sketch?
Waqas Khan: I never make sketches. A drawing for me is an emotional state.
SBV: To what extend did your stay in Vienna influence your work? 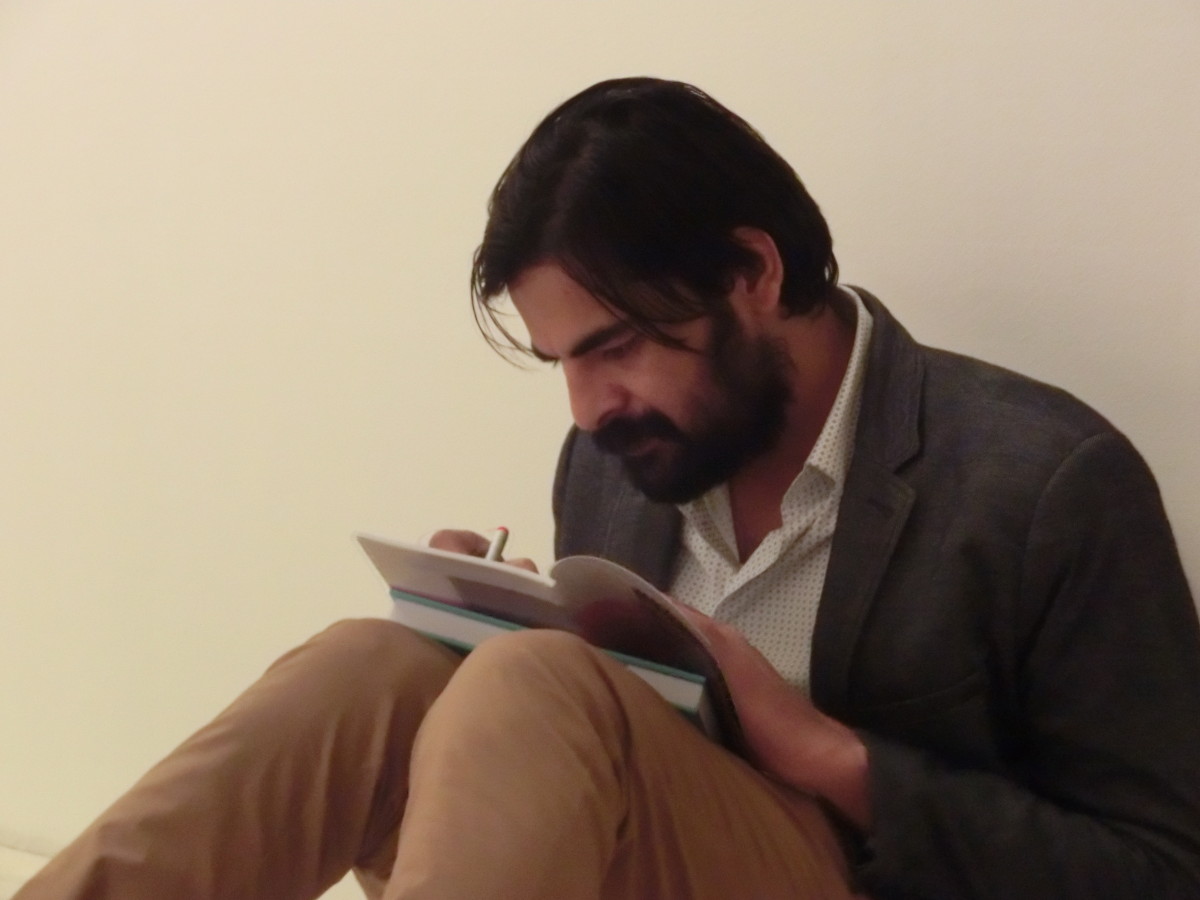 Waqas Khan: Vienna was a very new experience for me. In Lahore I usually work at night. In Vienna I tried at first to reverse my rhythm until I found the right sequence. Initially I had no table, no paper.Like a child I demended this Give it to me! Ursula had a table build for me, which is just perfect – and this way I could start trying out lager papers. 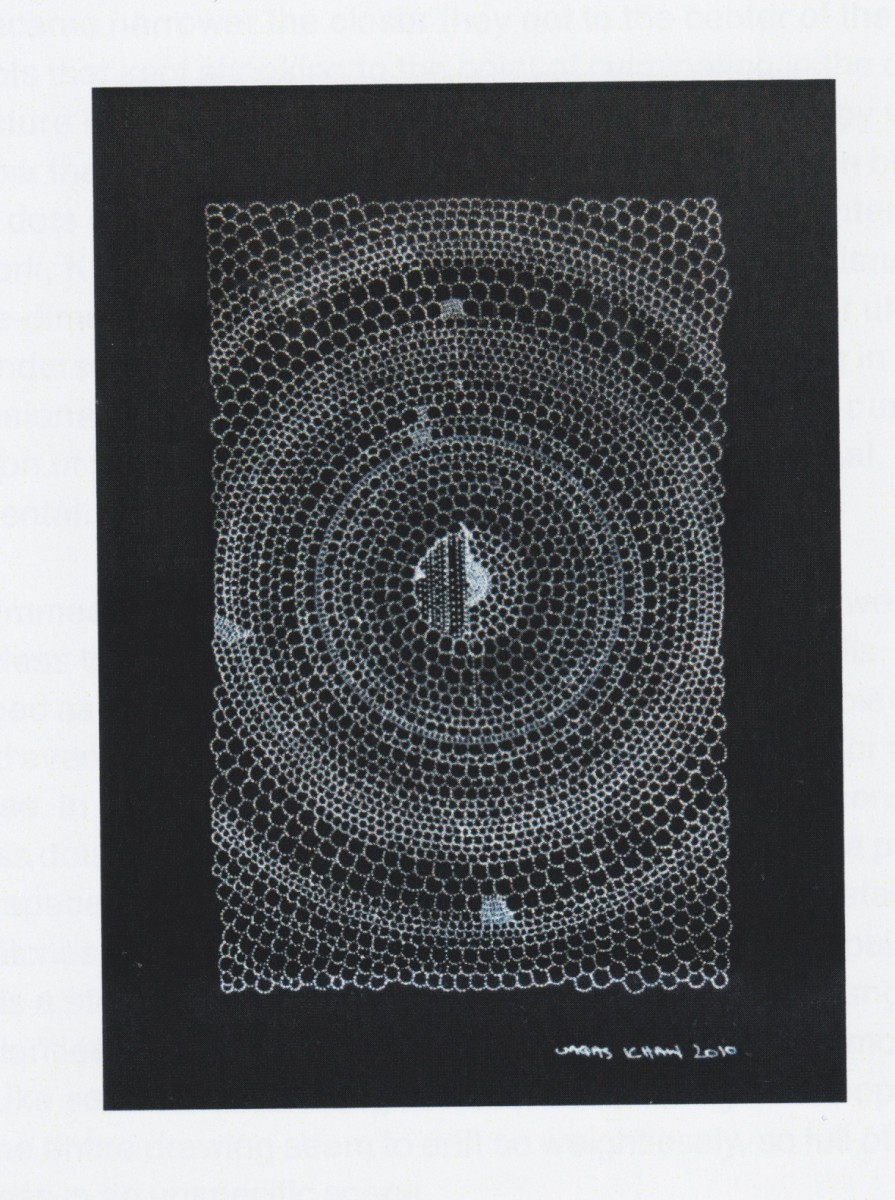 SBV: You mainly worked with black pens on white paper or white pens on black paper. Now you started with colored paper and colored pens – why? 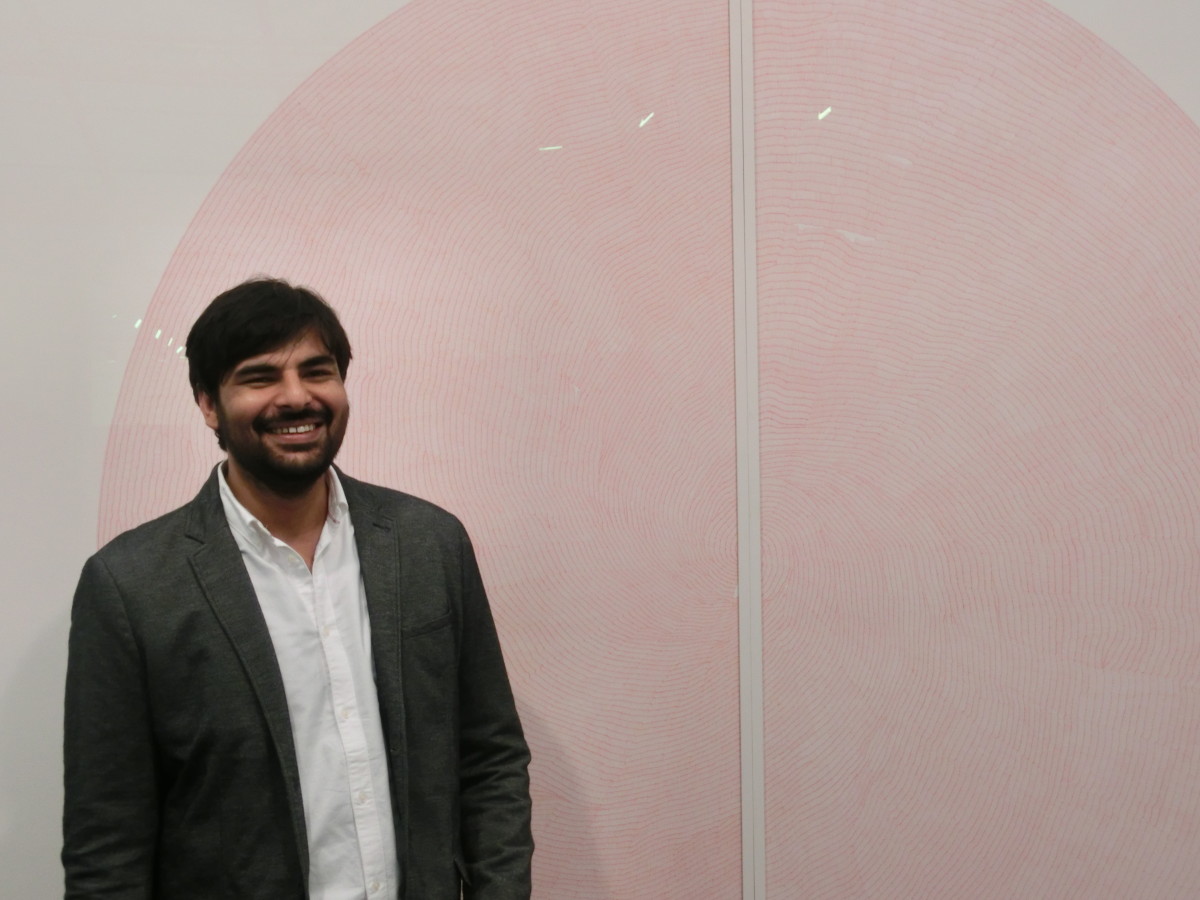 Waqas Khan: The color came perhaps from my strolls through Vienna. Once I saw an intense yellow on a poster – and that´s how I discovered yellow paper for me. I want to keep my work open for all influences, they are part of my experience and practice.
SBV: At first you opted for black paper – why?
Waqas Khan: Black is a reduction, a free surface. When I now use a red pen it is something different. I walked through the streets of Vienna, looked around. In everyday life red appears everywhere. Yet red is ambiguous: it´s danger, is terrorism, blood. But it is also Valentine´s Day, roses, a color of love. I wantd to play with this ambiguity, wanted to create a dancing red form.
SBV: And the color green?
Waqas Khan: Green is a fresh color. I come from a family of doctors and they say it´s a color that calms patients – green is nature. But green is also the color of prophecy, is a sacral color in our religion, a very peaceful color.
I felt green. Similarly, the other forms evole. I saw all the buildings in Vienna, the architecture, the density of buildings that allowd one house to emerge from many single ones. Everything is part of a larger structure – and this is also true of my drawings. My earlier works were more of a first step, a beginning. In Vienna a completely new development started.
SBV: In 2009 you already experimented once with paper when you nested seven paper frames into each other for „Seven Skies“. Is this work connected to Islam where one often speaks of seven skies?
Waqas Khan: I go for a walk every day. I love animals. I go to the mountains a lot. Religion is also part of my life. Of course, I also think about politics, just as I do about religion. But my art does not have anything directly to do with both. But I am interested in Sufismus, I am impressed by the spiritually defined life of the Sufis. Sufi is love,everything revolves around it, without any limitation, without beginning,without end.
SBV: Your works often are compared with miniature painting – do you see a direct relation?
Waqas Khan: My drawings don´t tell any stories. It´s more a process of construction, just as one puts one brick on top of the other, I add one dot to the other. Each individual dot tells about my like, some interrupt the regularity – one can perhapts glean from each of them how I feel in a second. The drawings are almost like diaries. The process is like a growth – that cannot be compared in any way to the static imagery in miniature painting.
SBV: You work with the Bardhakhat technique in which thousands of dots and commas are placed next to each other, which creates a fusion of colors and the folds of the clothing, the shadows in a face etc. Did you learn this technique while you were studying?
Waqas Khan: During my studies we did a three-month course in miniature painting which also includes this technique. But I don´t employ this technique since I don´t work with a brush but a pen. I want to achieve a similar effet as in miniature painting but by means of modern tools. But in my work  especcially the irregularities play an important role and these are excluded in miniature paintings. These aspects say almost as much as a self portrait of my physical and mental state – abstract but still clear.
SBV: Thanks for the interview!