Louvre Abu Dhabi today announced it will open its doors to the public on 11 November 2017. It is the first museum of its kind in the Arab world: a universal museum that focuses on shared human stories across civilisations and cultures. 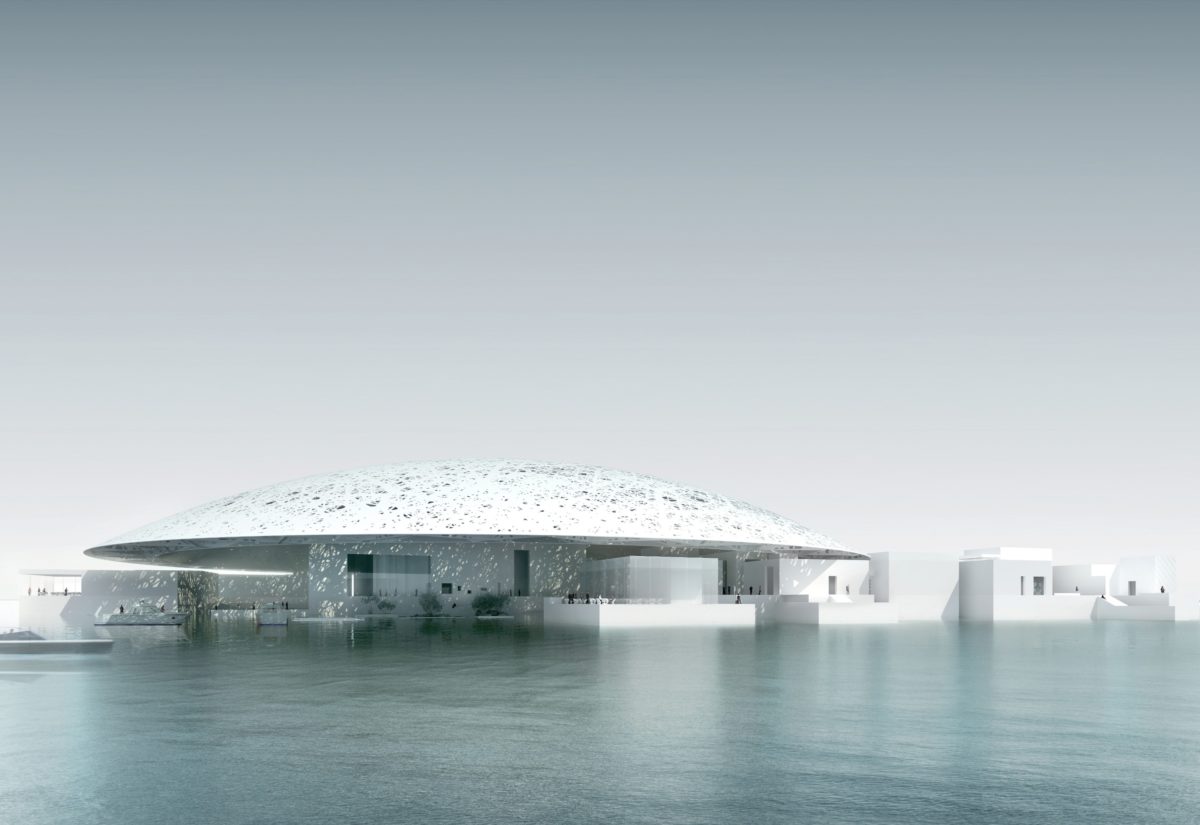 Located in Abu Dhabi, the capital of the United Arab Emirates (UAE), Pritzker Prize winning French architect Jean Nouvel has designed a museum city (Arab medina) under a vast silvery dome. Visitors can walk through the promenades overlooking the sea beneath the museum’s 180-metre dome, comprised of almost 8,000 unique metal stars set in a complex geometric pattern. When sunlight filters through, it creates a moving ‘rain of light’ beneath the dome, reminiscent of the overlapping palm trees in the UAE’s oases.
On display will be the museum’s important collection of artworks, artefacts and loans from France’s top museums. These span the entirety of human existence: from prehistorical objects to commissioned contemporary artworks, highlighting universal themes and ideas and marking a departure from traditional museography that often separates according to origin. In addition to the galleries, the museum will include exhibitions, a Children’s Museum, a restaurant, a boutique and a café. 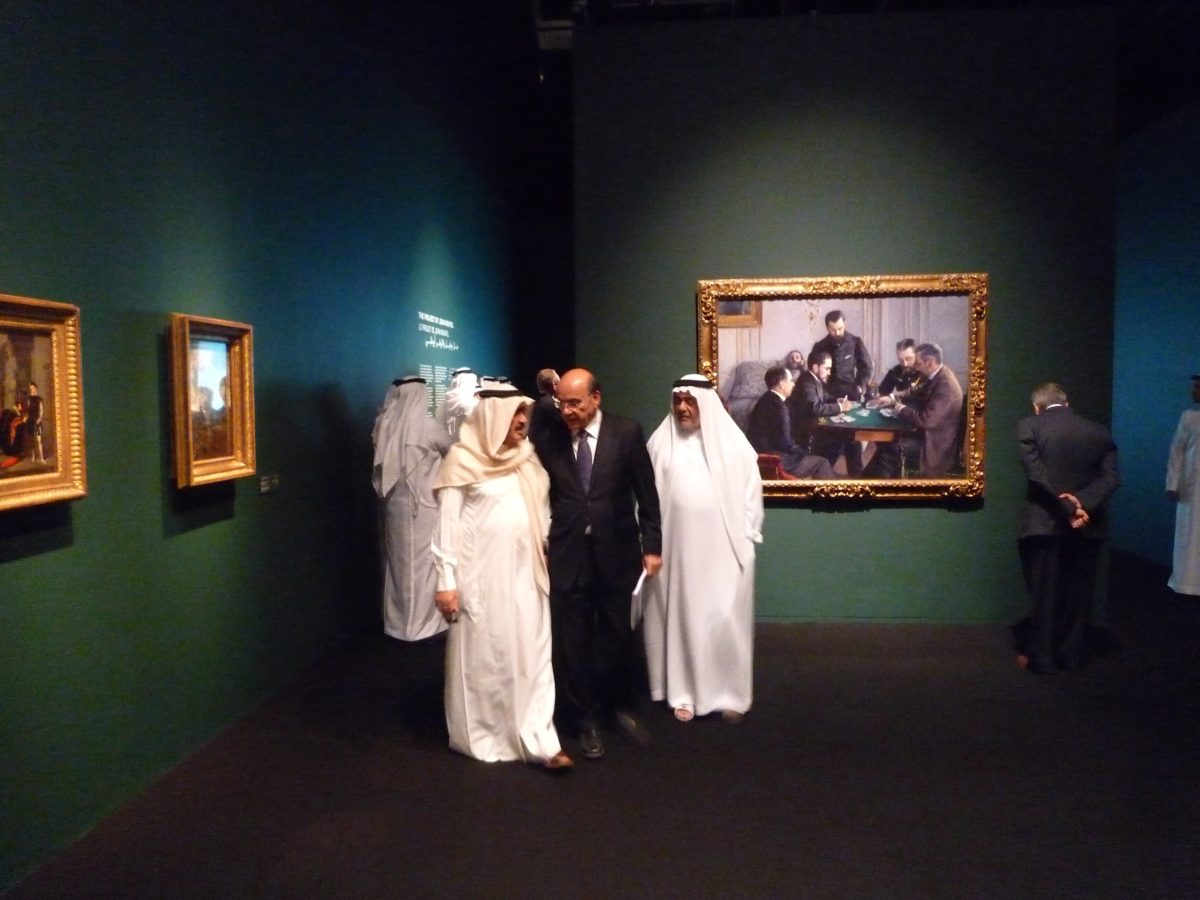 Louvre Abu Dhabi’s story will begin in the “Great Vestibule”, where visitors are introduced to important themes such as maternity and funerary rituals. The dialogue between works from different geographical territories, sometimes far apart, highlights similarities between the canons despite each having its own mode of expression. The galleries will be both chronological and thematic, and subdivided into 12 chapters. Displays include works from the earliest empires, including the first figurative representations, such as the Bactrian Princess created in Central Asia at the end of the 3rd Millennium BCE, funerary practices of ancient Egypt illustrated by a set sarcophagi of Princess Henuttawy, and the creation of new economies with a Decadrachm coin of Syracuse signed by the artist Euainetos. 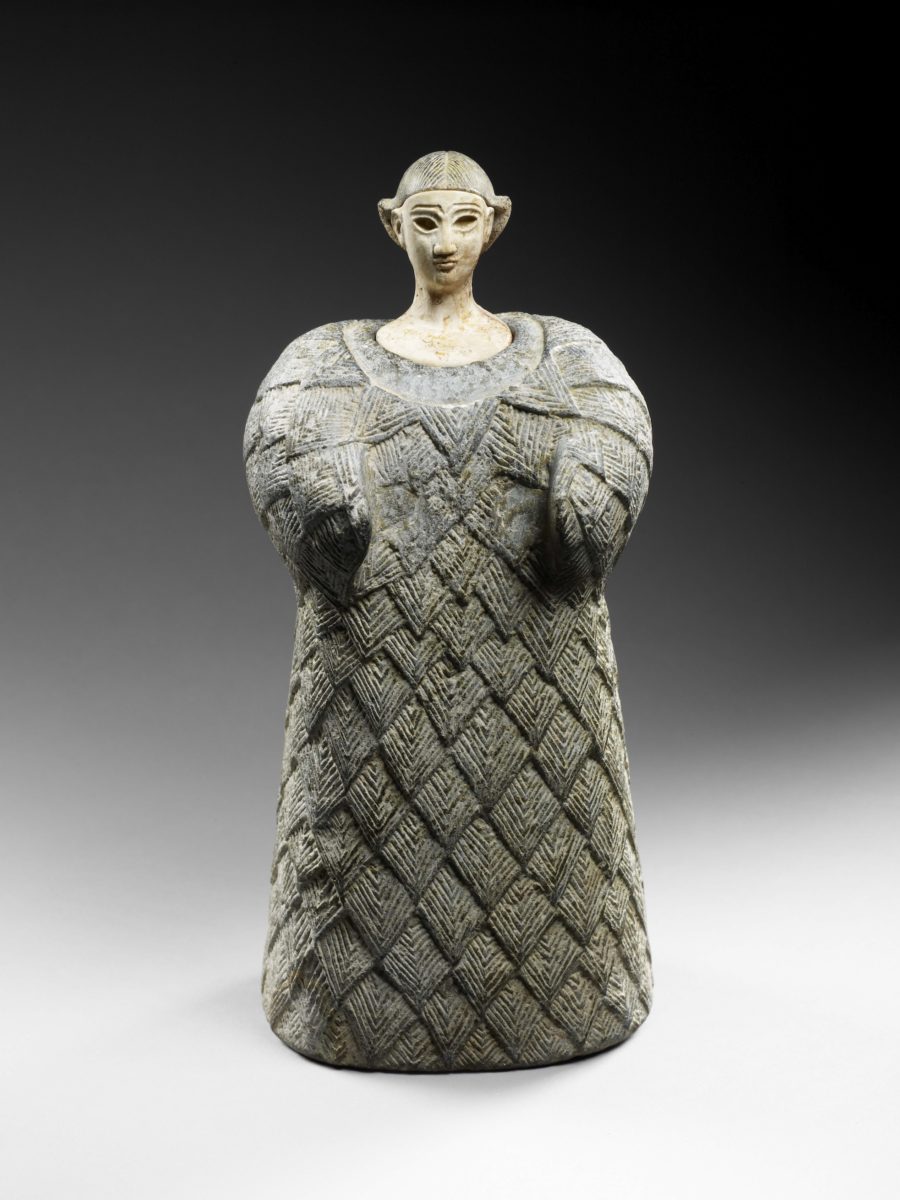 A gallery dedicated to universal religions will feature sacred texts: a Leaf from the “Blue Quran”, a Gothic Bible, a Pentateuch and texts from Buddhism and Taoism. The artistic exchanges on the trading routes during the Medieval and Modern periods are brought to the fore through a important number of ceramic works. Between Asia and the Mediterranean and then between Europe and America, guests will appreciate how the world’s horizon gradually expanded. A set of screens from the Japanese Namban demonstrate the dialogue between the Far East and Europe. From the image of the Prince throughout the world, illustrated by an important Ottoman Turban Helmet to a more intimate vision of a new art of living, the museum presents an exceptional chest of drawers made in Red Chinese lacquer by Bernard II Van Risenburgh (BVRB, 1696–1766), created in France. In a section about Modernity are Edouard Manet’s (1832–1883) the Gypsy, Paul Gauguin’s (1848–1903) Children Wrestling, Piet Mondrian’s (1872–1944) Composition with Blue, Red, Yellow and Black. On show will be a monumental work by the artist Ai Weiwei (1957) and his questioning of globalisation.

Louvre Abu Dhabi’s first site-specific works installed in the outdoor areas by renowned contemporary artists, interact with the spirit of the museum and the fabric of the architecture. American artist Jenny Holzer (1950) has created three engraved stone walls named For Louvre Abu Dhabi (2017). These cite important historical texts from Ibn Khaldun’s Muqaddimah, the Mesopotamian bilingual (Akkadian / Sumerian) Creation Myth tablet, and the 1588 annotated edition of Michel de Montaigne’s Les Essais. Italian artist Giuseppe Penone (1947) has produced several works specifically for Louvre Abu Dhabi. Leaves of Light (2017) is a vast bronze tree with mirrors placed in its branches to reflect the ‘rain of light’. Propagation (2017) is a wall of porcelain tiles that depict hand-drawn concentric circles originating from the fingerprint of Sheikh Zayed, the UAE’s founding father. It was produced in collaboration with the workshops of Sèvres – Cité de la céramique in France. 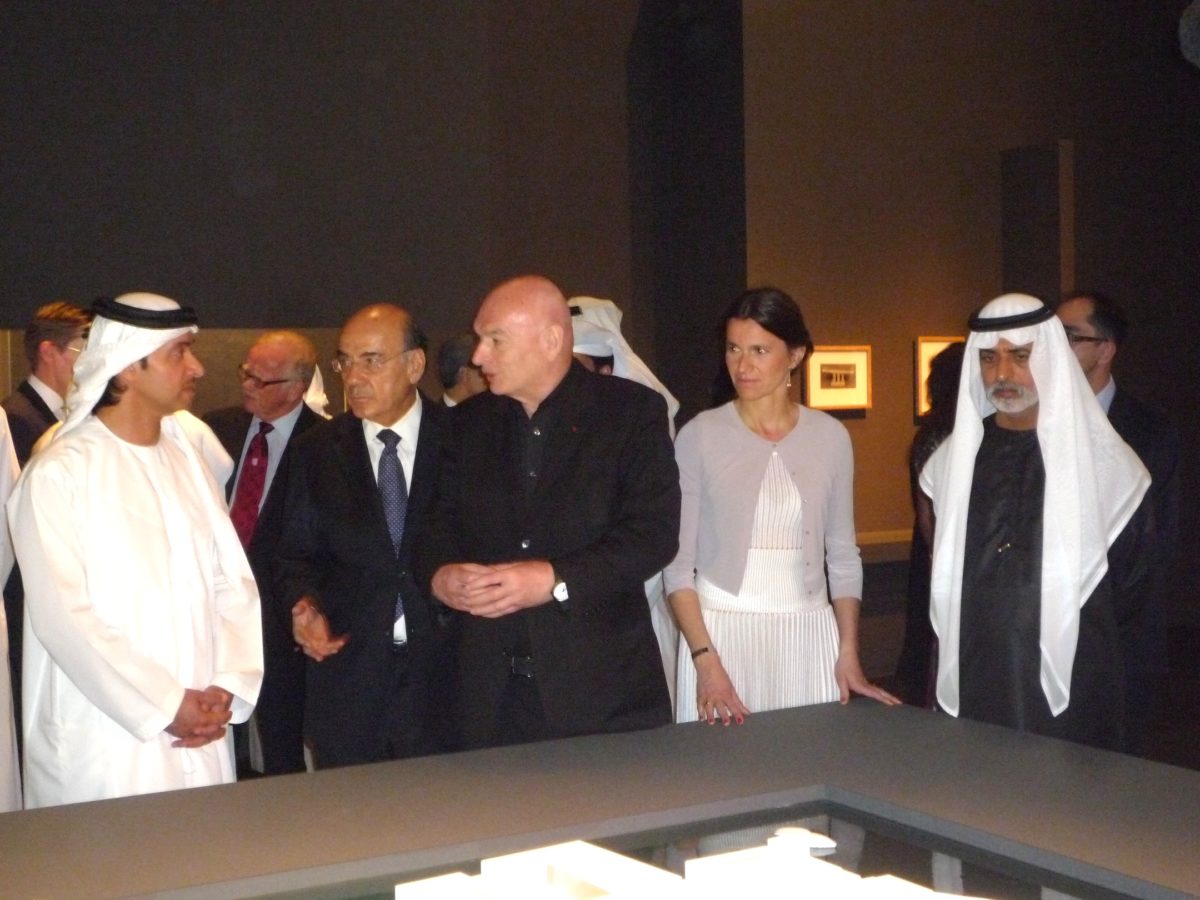 Endowed with an innovative scientific and cultural project combining the expertise of 13 French museums and institutions steered by the Agence France-Muséums, the Louvre Abu Dhabi will indeed offer visitors a unique experience: a brand new journey through major works of art from different civilisations, mirrored to reveal our common humanity. The Louvre Abu Dhabi therefore carries a message of tolerance and peace and stresses the unwavering commitment of our two countries to promote culture and education as a shield against extremism. 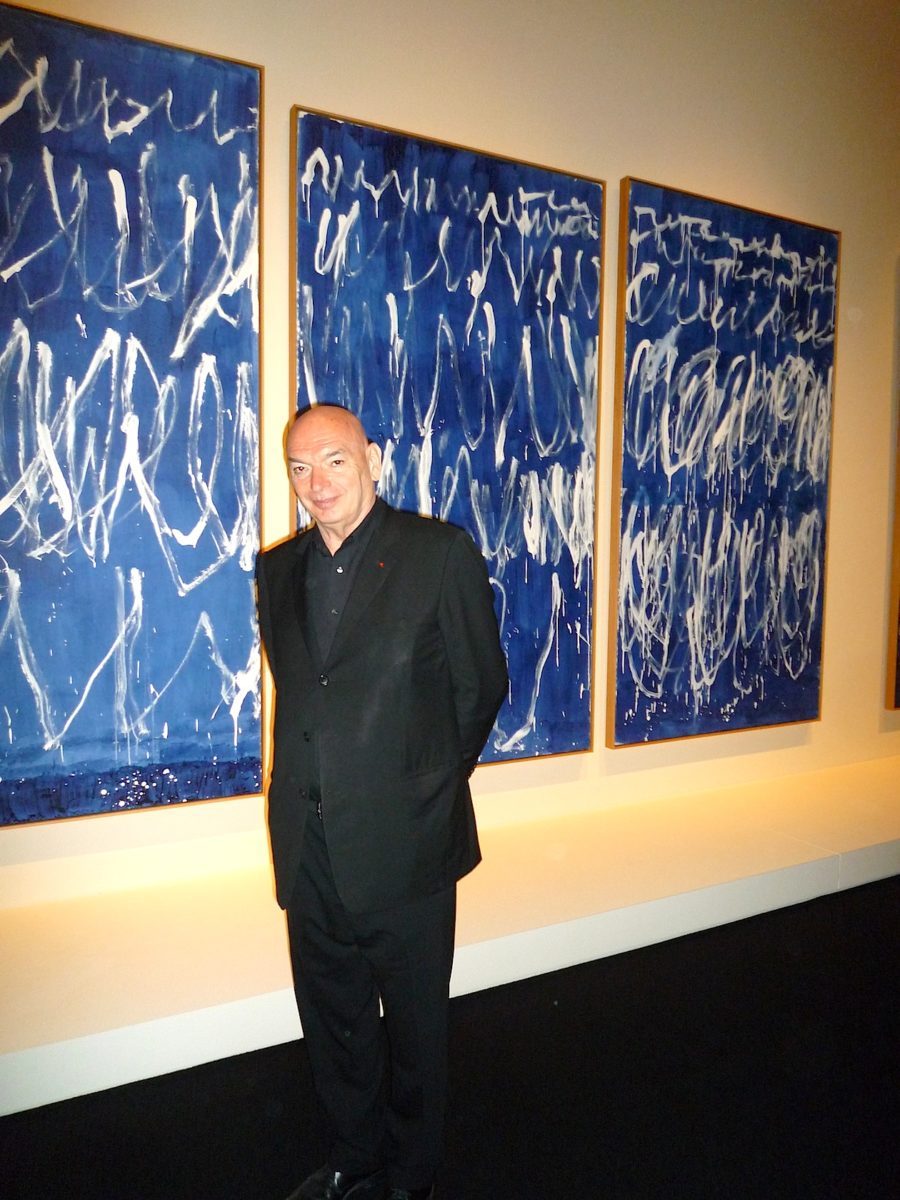 Jean Nouvel, the architect of the Louvre Abu Dhabi: “Louvre Abu Dhabi will open in two months. After several years of studies and construction, guests will be able to enter this place of light, this revelatory meeting place of a number of planetary cultures beyond the seas and centuries. It is an architecture that is protective of its treasures, it is a homage to the Arab city, to its poetry in geometry and light, and, under the large cupola, it is an evocation of the temporalities which inexorably punctuate the hours, days, and the passing of our lives.”
In the galleries, important artworks on loan from 13 leading museums in France will be presented. Highlights include Leonardo da Vinci’s (1452–1519) La Belle Ferronnière (on loan from musée du Louvre); Vincent van Gogh’s (1853–1890) self-portrait (musée d’Orsay et de l’Orangerie); a rare ivory saltcellar from the Benin Empire (musée du quai Branly – Jacques Chirac); a Globe by Vincenzo Coronelli (1650–1718) of Bibliothèque nationale de France; a pair of gui vessels (Musée national des arts asiatiques Guimet); Jacques-Louis David’s (1748–1825) Napoleon Crossing the Alps (Château de Versailles); Auguste Rodin’s (1840–1917) Jean d’Aire from the group the Burghers of Calais (Musée Rodin); a 13th century reliquary chest (Musée de Cluny – Musée national du Moyen Âge); a Chinese ewer of Persian shape (Musée des Arts Décoratifs); a Breastplate of Marmesse (Musée d’archéologie nationale – Saint Germain en Laye); the Apollo Belvedere statue by Primatice (1504–1570) from Château de Fontainebleau; and Standing Woman II by Alberto Giacometti (1901–1966) from Centre Pompidou. 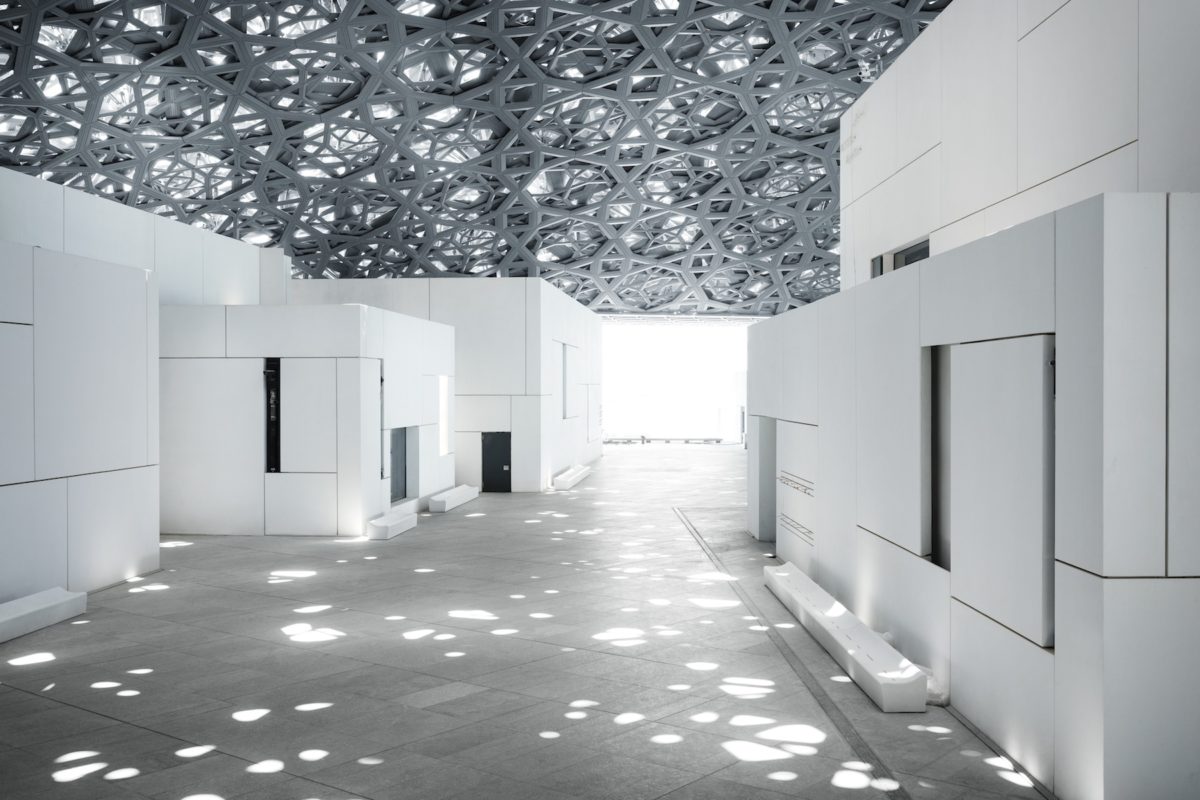 The inaugural special exhibition, From One Louvre to Another: opening a museum for everyone, opens on 21 December 2017, and traces the history of Musée du Louvre in Paris. Divided into three sections, the exhibition will look at the royal collections at Versailles under King Louis XIV, followed by the residency of the Academy and Salons in this palace for artists, and conclude with the creation of the modern Musée du Louvre. It will feature aproximately 145 significant paintings, sculptures, decorative arts and other pieces from the collections of Musée du Louvre and Château de Versailles. The exhibition is curated by Jean-Luc Martinez, President-Director, Musée du Louvre, and Juliette Trey, Curator, Prints and Drawings Department, Musée du Louvre.
The intergovernmental agreement includes the loan of the Musée du Louvre’s name for 30 years and 6 months, temporary exhibitions for 15 years, and loans of artworks for 10 years.
Tickets for the museum will cost 60 AED for general admission and 30 AED for ages between 13 and 22, as well as UAE education professionals. Free entry will apply to members of the museum’s loyalty programme, children under 13 years, ICOM or ICOMOS members, journalists, and visitors with special needs (referred to visitors with determination in the UAE) as well as their companion. (Press Release)