Shortlist for 4. plinth at Trafalgar Square 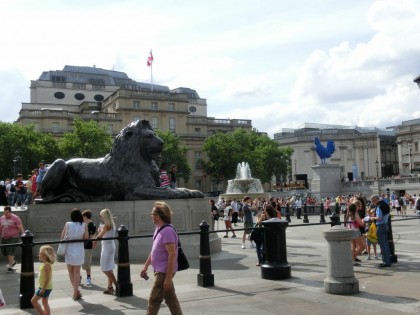 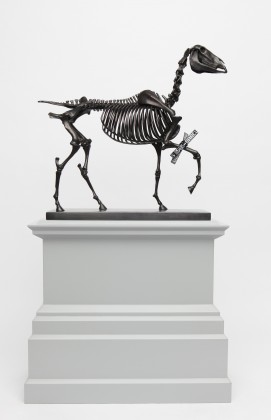 The artists Marcus Coates, Hans Haacke, Mark Leckey, Liliane Lijn, David Shrigley and Ugo Rondinone have been commissioned to produce maquettes of their proposed works, which will go on display at St Martin-in-the-Fields from 25 September – 17 November 2013. The two selected artists will be announced by the Mayor of London in early 2014, and their works will be unveiled in Trafalgar Square in 2015 and 2016 respectively. 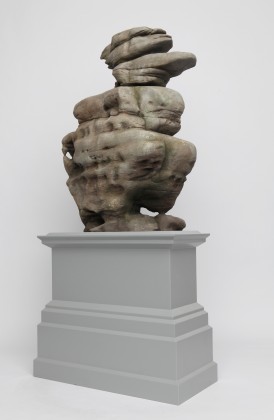 Marcus Coates has proposed to place a large replica of ‘The Eagle’, a rocky outcrop situated in Brimham Rocks, Yorkshire on the plinth; David Shigley’s design, Really Good, is a 10-metre-high thumbs-up, cast in the same dark patina as the other statues in the square; Hans Haacke has created a skeletal, riderless horse that will display the live ticker of the London Stock Exchange on an electric ribbon tied to its leg; Liliane Lijn’s proposal shows two identical kinetic cones made of brushed anodised aluminium engaged in a mesmerising dance; Ugo Rondinone’s Moon Mask is an aluminium, abstract sentinel facing out over the square; and Mark Leckey has designed a creature made of amalgamated elements of the permanent statues in Trafalgar Square, including details from the statues of James II, Admiral Jellicoe, the water fountain, and the Fourth Plinth itself. 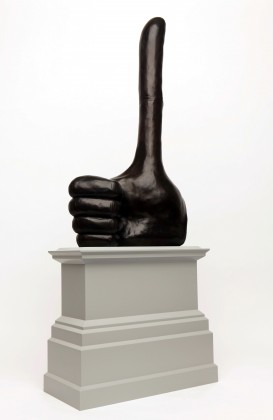 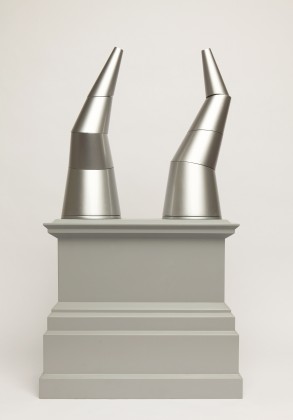 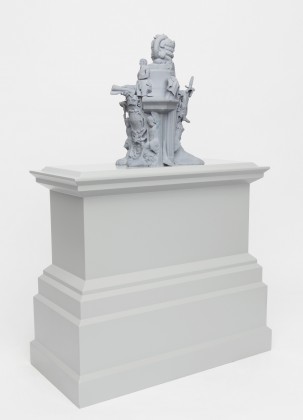 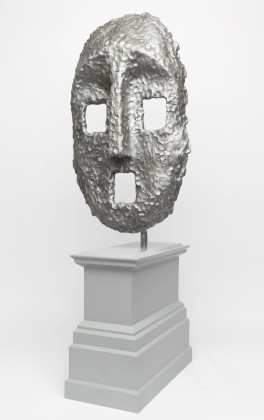 Hans Haacke
Born 1936 in Cologne. Lives and works in New York.
For the last four decades Hans Haacke has been examining the relationships between art, power and money, and has addressed issues of free expression and civic responsibilities in democratic societies in his work. He works in many different mediums including painting, photography and written text. He has had recent solo exhibitions at Museo Nacional Centro de Arte Reina Sofía, Madrid (2012); MIT List Visual Arts Centre, Cambridge, MA (2011); X-Initiative, New York (2009); and Akademie der Künste, Berlin (2006). Haacke’s work has been included in four Documentas and numerous biennials around the world. He shared a Golden Lion Award with Nam June Paik for the best pavilion at the 45th Venice Biennale (1993), and in 2000 he unveiled a permanent installation in the Reichstag, Berlin.

Liliane Lijn
Born 1939 in New York. Lives and works in London.
Internationally exhibited since the 1960s, with works in numerous collections including Tate, the British Museum, and the V&A, and FNAC, Paris, Lijn is best known for her kinetic sculptures and her work with language and light. Recent exhibitions include Light Years at Sir John Soane’s Museum, London (2011); Gallery One, New Visions Centre, Signals, Indica at Tate Britain, London (2012); Ecstatic Alphabets/Heaps of Language at MoMA, New York (2012); and Cosmic Dramas, mima, Middlesborough. Recent public commissions include Solar Beacon, a sci-art installation of heliostats on the towers of the Golden Gate Bridge; and Light Pyramid, a beacon for the Queen’s Jubilee, which was commissioned by Park Trust and MK Gallery, Milton Keynes.

David Shrigley
Born 1968 in Macclesfield. Lives and works in Glasgow.
David Shrigley’s work draws on the British tradition of satire, creating drawings, animations and sculptures that reflect the absurdity of contemporary society. He has had recent solo exhibitions at Bradford 1 Gallery (2013); Cornerhouse Gallery (2012), Hayward Gallery, London (2012); Yerba Beuna Centre for the Arts, San Francisco (2012); and Kelvingrove Museum, Glasgow (2010). Shrigley’s Sort of Opera: Pass the Spoon was performed at Tramway, Glasgow, and Southbank Centre, London (2011 – 12), and he has been nominated for the Turner Prize 2013.