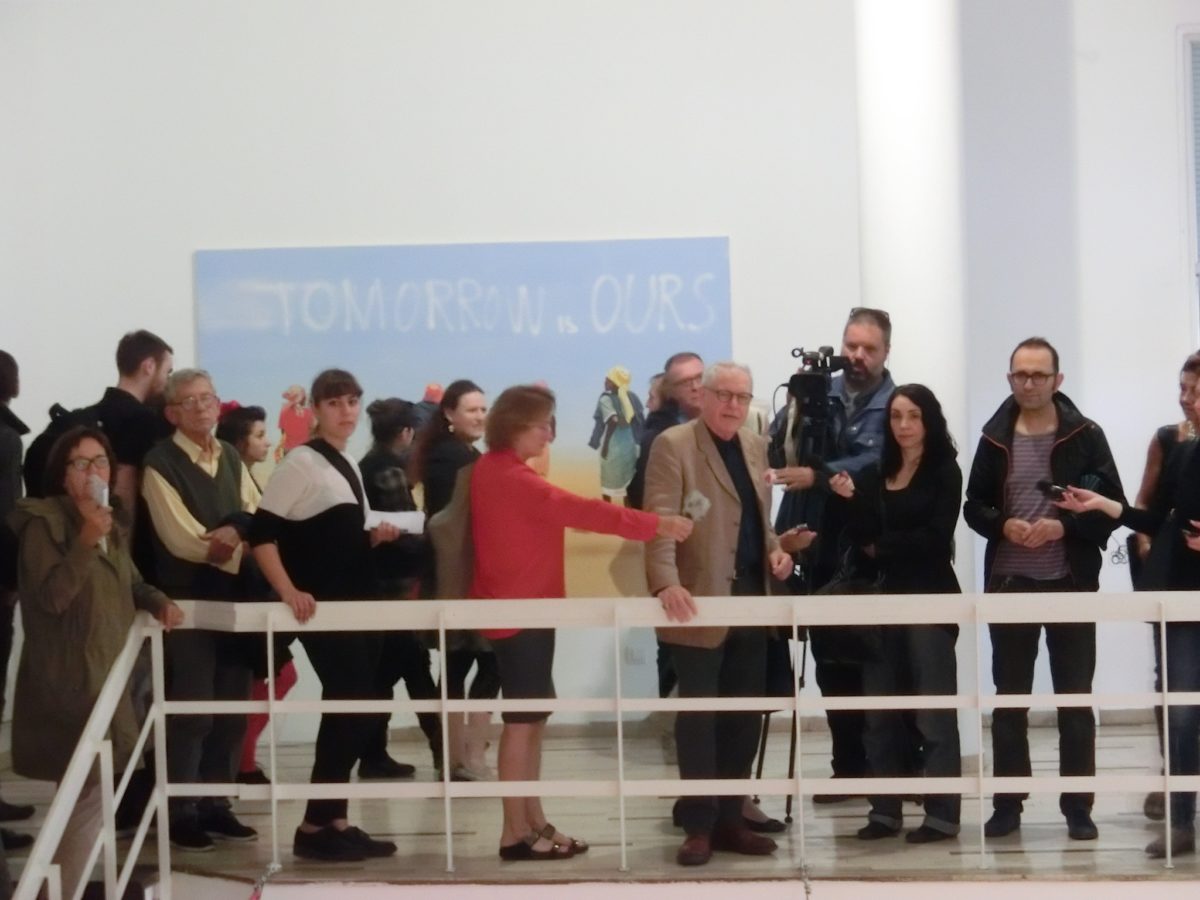 Sabine B. Vogel: You curated the 56. October Salon and decided quite a lot of artists from CEE – did you do a lot of research?
David Elliott: The younger artists came through an open submission. Ther was no chance of making it completely international, the budget would not allow this. So I said let´s focus on the former Austro-Hungarian Empire and the Ottoman Empire, both of which Serbia was, at different times, a part. And now it wants to become a member of the EU, so let´s also include the european states. So these were three almost random ready-mades, the past – memory, and the future – desire.
SBV: How many artists applied? 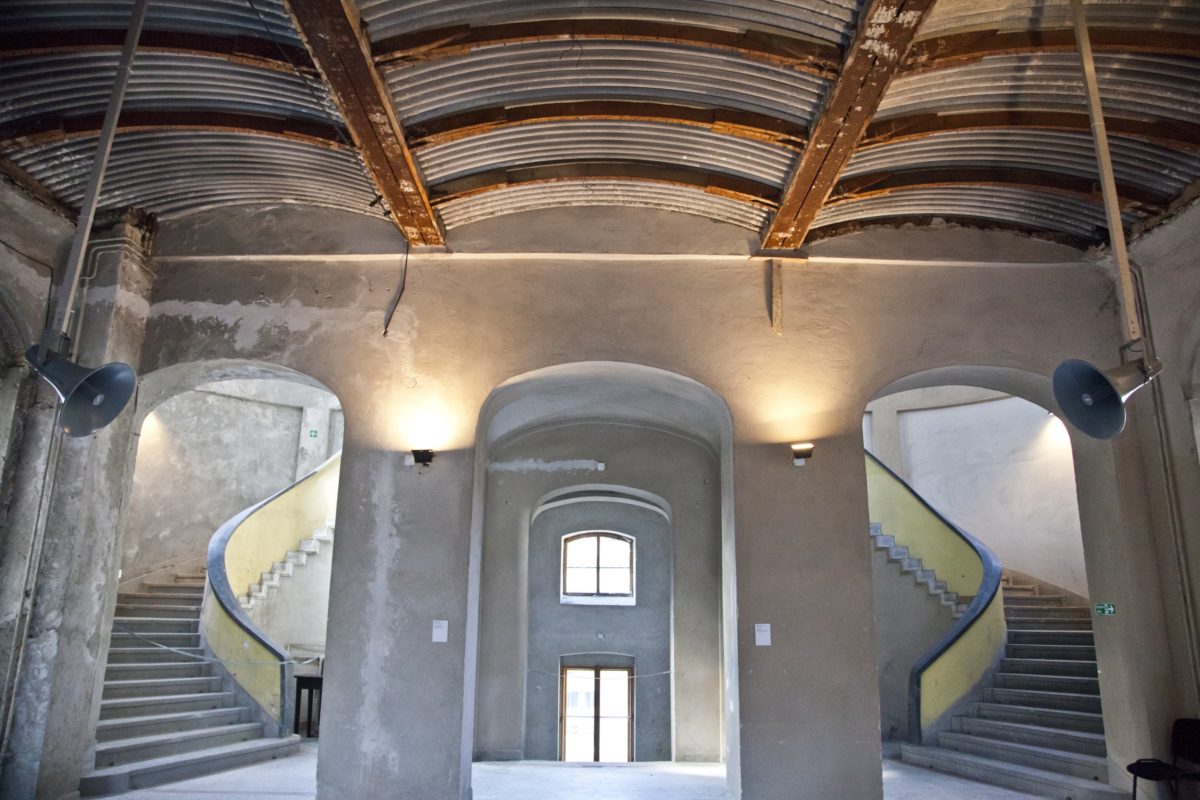 David Elliott: Around 500 … compared to the Young Artists’ Biennale in Moscow, it´s not so many. In 2014 there were more then 2000. But I also chose a lot of artists myself outside the open submission.
SBV: Why did you accept the invitation for the October Salon?
David Elliott: I am interested in the region. I first came here in 1966, hitchhiking across Eastern Europe and I liked it. I have known people here for a long time. The the Museum of Modern Art in Belgrade was really wonderful but it has been closed over a decade. I remember it very well, an interesting collection!
SBV: Did you also include in this exhibition some works with more historical positions? 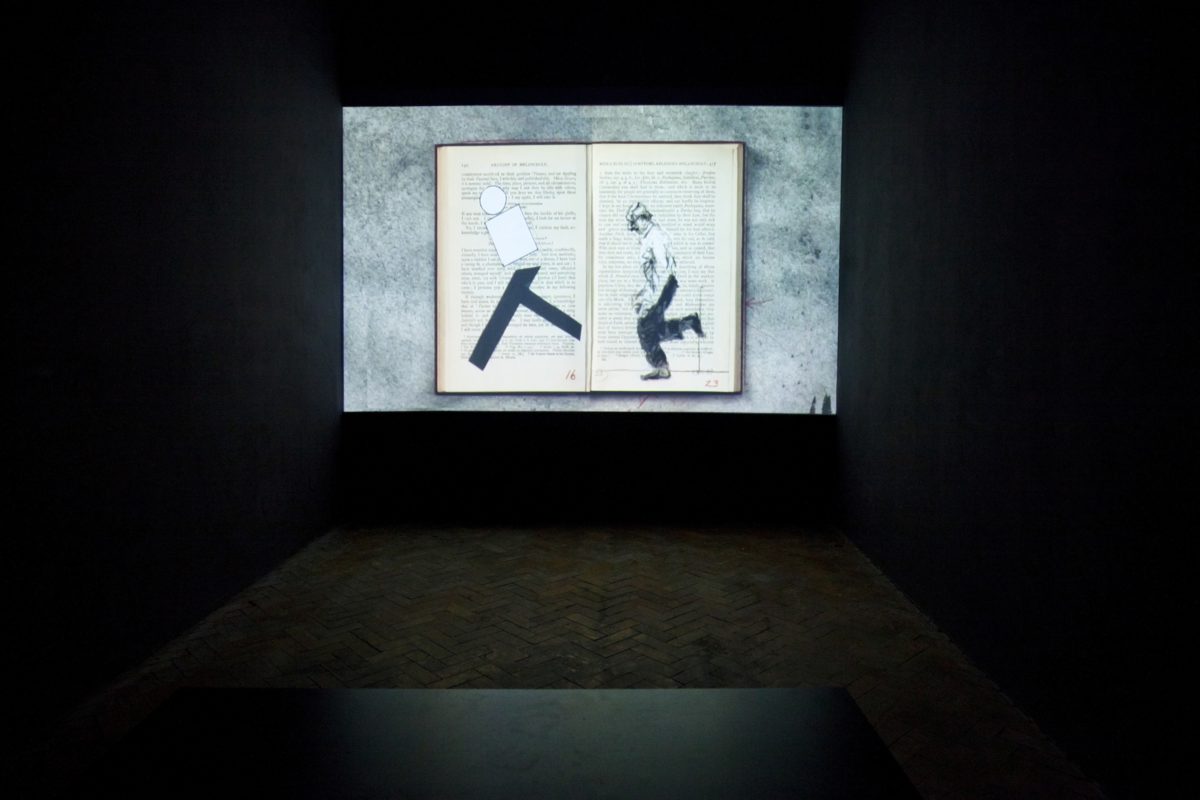 David Elliot: Yes, there’s the video installation Entanglement Games (2010-16) by Jovan ČEKIĆ who has been working since the early 1970s and also the satirical anti-macho collages by Jelena Trpković. One of my main ideas for the exhibition was to show younger with more established artists, so there´s for example also two large works by Jenny Holzer, a pacey tango of a video by William Kentridge, an installation about naive empty love by Yang Fudong and a lugubriously tragic sound piece based on two Scottish/Irish ballads about jealousy and sorroricide by Susan Philipsz.
SBV: Love and disappointment – is the exhibition concept directly connected to the region?
David Elliott: Yes and no. It´s what came into my head when I first thought about it. Do you know the video that Adela Jušić and Lana Čmajčanin from Sarajevo made in 2011 … these two young women constantly repeat „we will never talk about the war again“? for 10 minutes over and over again, always the same sentence but with different intonation. I thought: absolutely! So this exhibition is about emotions. It´s a subjective response to what has been going on, the pretentiousness of a lot of recent exhibitions the last Venice Biennale, for instance, where they actually managed to commodify Karl Marx – pretty difficult!!!… I decided to make an exhibition that acknowledged the importance of emotion in contemporary art.
SBV: Did you commission works for the October Salon? 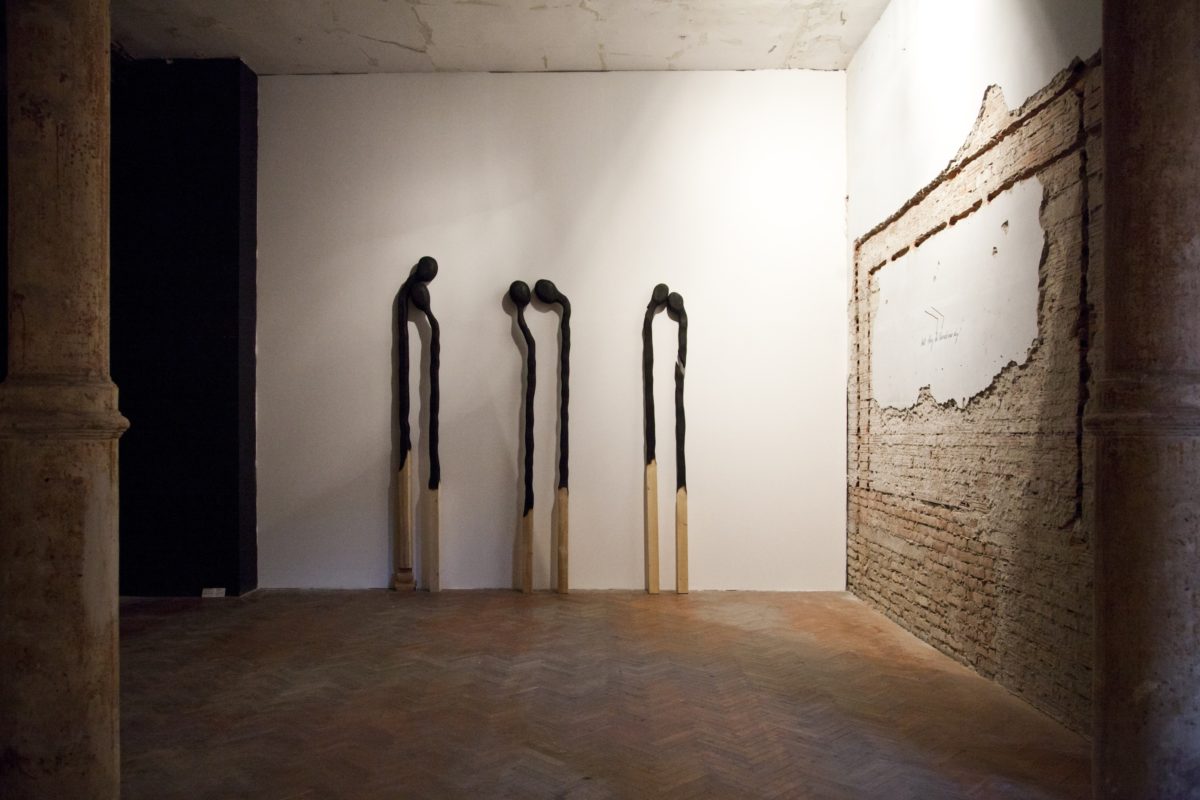 David Elliott: Commissioning is a far too big word. Some artists have responded with new works like Ivana Ivković’s time-based, ambient installation Lines, Rows, Columns (Dormitary) that at time incorporates 25 naked men. It’s a meditation on the history oft he building in which it is shown which was once a Military Academy surrounded by bombed out ruins from the NATO action against Milosević in the late 1990s. And then there’s Janet Laurence’s Underlying (2016)‚ an ‚emergency room’ or healing centre for a dead tree or Mariana Vassilieva’s two new specially made works – her installation Matches and Denkpause, a 6 metres high, tottering tower of barely balanced chairs.
SBV: You expanded the show into the city and decided to use a second space, the Culture-Centrum – why?
David Elliott: I thought that some works needed a clean white cube and also I like the building: the Belgrade Culture Centre is a fine example of early Yugoslavian Modernism. I also wanted some works from the beinnale to be in the heart of the city. Although I heartily dislike everything that the former military academy stands for, its ghosts are friendly, which is really surprising!
SBV: Its ghosts? 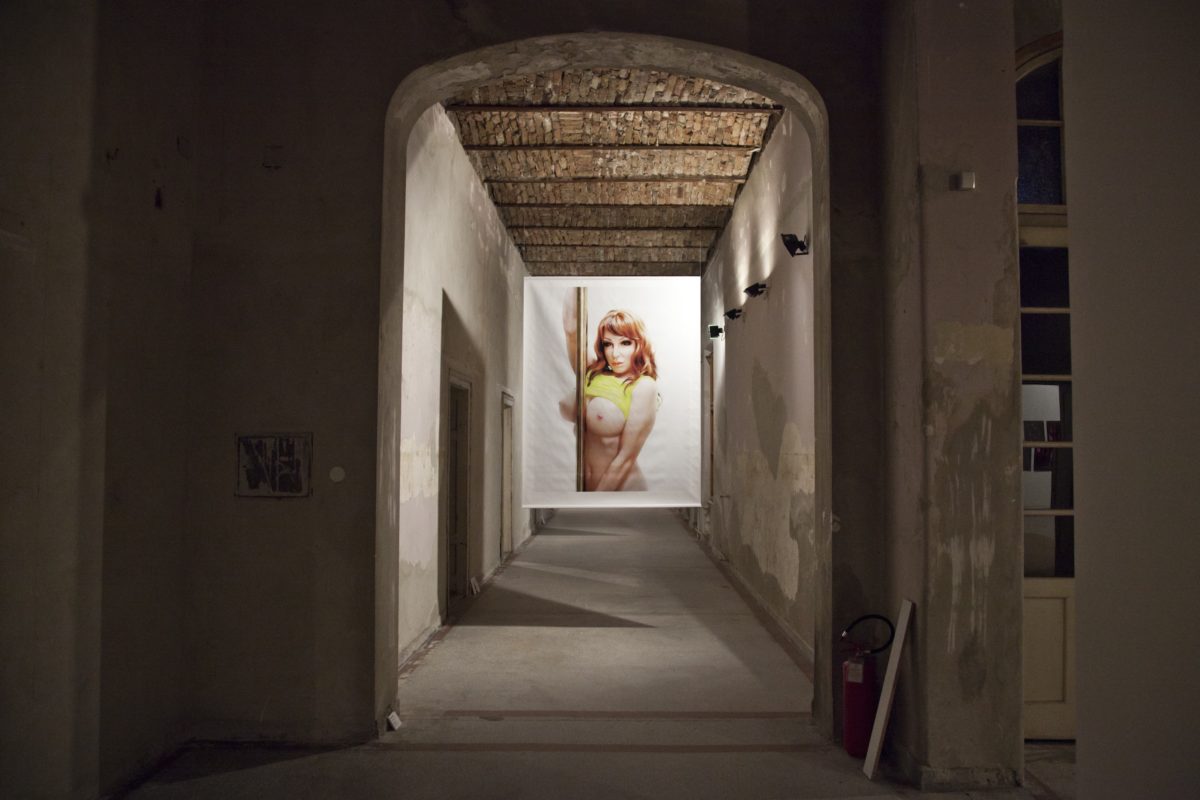 David Elliott: Yes! There´s another site specific work, the three large venuses by Aurora Reinhard that restrict movement along one of the large circulation spaces…
SBV: … the phantasies of young soldiers?
David Elliott: Maybe – it has something for everyone. It just doesn´t stop giving.
SBV: You have made so many biennials, is there something special about this one in Belgrade?
David Elliott: Yes, but it´s mostly technical. There was a new board who seemed mainly to be political appointments, fairly rightwing. I think they were a little bit confused what they should do with the October Salon, but by some miracle they assked me to do it and once this was decided it was strictly stated that they should not interfere. The administration is generally good and the installation and production staff have been excellent! 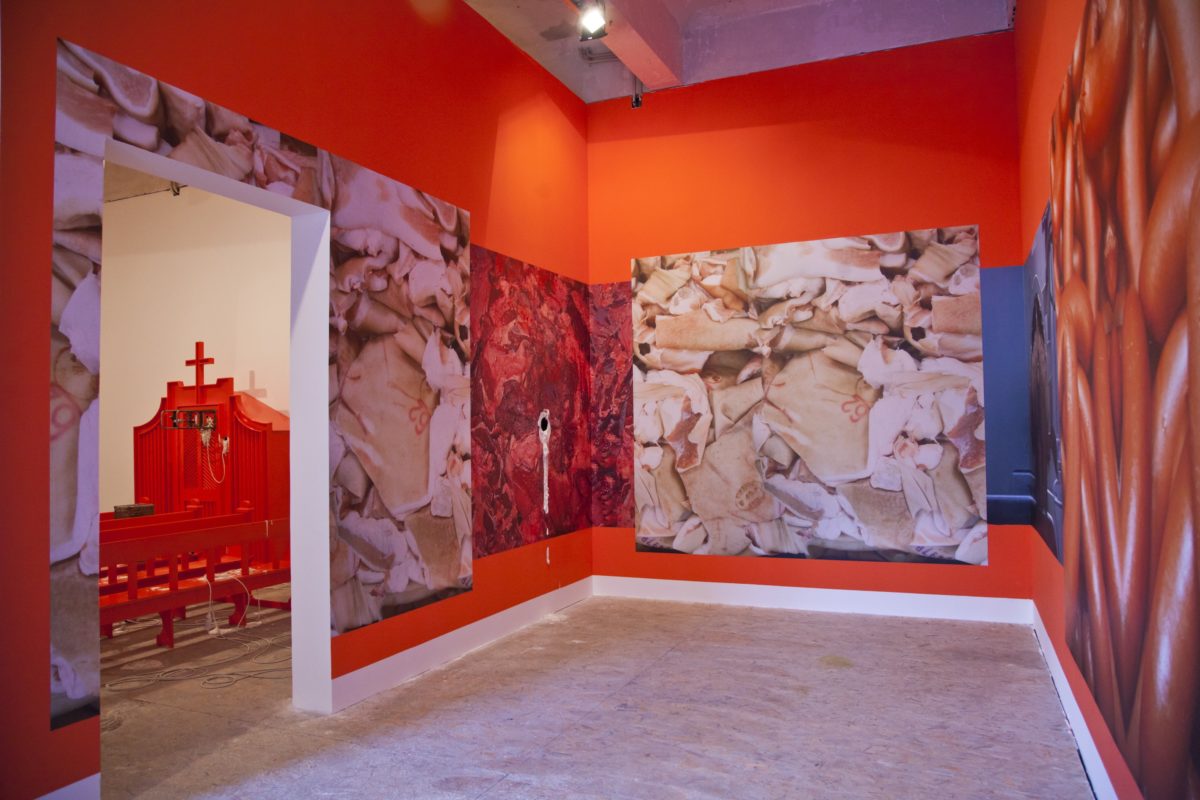 Peter Johansson, Let Us Now Rest and Await Guidance from Above, 2016

SBV: How are the expectations in the city, maybe compared to the Berlin Biennale?
David Elliott: The expectations in Berlin must be zero by now! How can they get it consistently so wrong? They are quite high here, people are hungry for contemporary art. And I heard they are disappointed that it does not take place not every year as before. Also events since the dissolution of Yugoslavia have rather alienated them from the international scene. So they feel a bit off the main track – a bit, perhaps, like us Brits will feel after dull, boring Brexit…..